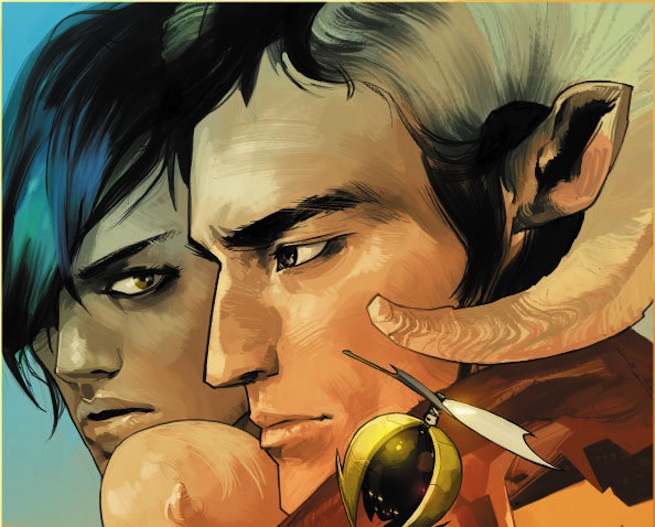 Update: This post has been updated with an official explanation from ComiXology on why the comic book containing images of gay sex was removed

from its iOS app stores.

Yesterday, creator Brian K. Vaughan informed the world that issue #12 of his and Fiona Staples’ hit comic book series Saga was rejected by Apple due to explicit content and subsequently would not be available for sale within any of ComiXology’s iOS apps.

ComiXology responded to a fury of criticism from fans that blamed Apple for removing the comic book, when in fact it was ComiXology itself that decided to pull the book from its iOS in-app stores. The digital comic book startup said it interpreted Apple’s terms of service incorrectly, which led them to removing Saga #12.

The explicit content appears on the first page of the issue, in which character Prince Robot IV — who has a television screen for a head — is displaying an image of a man performing oral sex on another man. Also, the TV-headed guy is being held up by a dude who’s got peacock feathered wings and is screaming for a medic. Honestly, the image was so subtle that I read the book cover to cover twice before realizing where the gay sex scene pops up.

“This is a drag, especially because our book has featured what I would consider much more graphic imagery in the past, but there you go,” Vaughan wrote in a statement to fans. “Fiona and I could always edit the images in question, but everything we put into the book is there to advance our story, not (just) to shock or titillate, so we’re not changing shit.”

The book has since returned to ComiXology’s iOS stores.

Here’s the official statement from CEO David Steinberger about the ban:

In the last 24 hours there has been a lot of chatter about Apple banning Saga #12 from our Comics App on the Apple App Store due to depictions of gay sex. This is simply not true, and we’d like to clarify.

As a partner of Apple, we have an obligation to respect its policies for apps and the books offered in apps.  Based on our understanding of those policies, we believed that Saga #12 could not be made available in our app, and so we did not release it today.

We did not interpret the content in question as involving any particular sexual orientation, and frankly that would have been a completely irrelevant consideration under any circumstance.

Given this, it should be clear that Apple did not reject Saga #12.

After hearing from Apple this morning, we can say that our interpretation of its policies was mistaken. You’ll be glad to know that Saga #12 will be available on our App Store app soon.

We apologize to Saga creator Brian K. Vaughan and Image Comics for any confusion this may have caused.