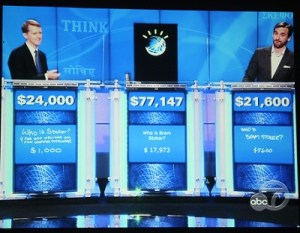 The war is over, and humanity has ceded its crown as the master of trivia to IBM’s Watson supercomputer.

Now the team responsible for the humanity’s downfall in Jeopardy is ready to answer questions as to how — and why — they built and programmed Watson on news aggregator Reddit. The team posted a question-and-answer thread, called an “ask-me-anything,” that lets Reddit users comment with questions.

IBM is the latest of a series of companies that has appealed to the Reddit community to generate some positive buzz for their technology. Condé Nast-owned Reddit is populated by tech-savvy individuals that are typically more critical of entrenched services that are plagued with bugs. Maybe the idea is that if you can handle Reddit, you can handle just about anything.

Microsoft regularly throws its teams into the pool with Reddit sharks — the company sent in its Hotmail team (which wasn’t quite that successful) and its Internet Explorer 9 team (which was quite successful.) It seems like it’s a pretty hit-or-miss strategy, but it at least makes the team appear more human to the hyper-critical tech community that populates news aggregator sites like Reddit and Y Combinator’s Hacker News.

Watson competed against Jeopardy champions Ken Jennings and Brad Rutter over three days of intense trivia, and won by making a $17,000-plus Final Jeopardy bet on the answer “William Wilkinson’s ‘An account of the principalities of Wallachia and Modavia’ inspired this author’s most famous novel.” Watson answered, “Who is Bram Stoker?” Watson ended the three-day run with $77,147, while Jennings had $24,000 and Rutter had $21,600. Jennings even quipped on his response that he, for one, “welcomes our new computer overlords.”

So far the team has only jumped in to ask that each curious Redditor stick to a single question per comment. But the answers are probably on the way, given how much interest there was in bringing the IBM team to the site. Earlier today, there was a request to bring the engineers onto the site for an “ask-me-anything” thread that hit the front page — and the official question-and-answer thread hit the front page just a few minutes ago.

In the mean time, IBM’s researcher showed VentureBeat’s Dean Takahashi and others how Watson works at an event in San Francisco last night.