NEW YORK — Instagram nabbed 150 million users for its addictive mobile photo and video sharing, but what if you want to send something to just one person, or to a small group?

At a press event today in a swank hotel suite, Instagram announced its solution to that problem: Instagram Direct. Now when you’re getting ready to share a photo on Instagram, you’ll have the choice of sharing it with everyone or just with specific people and groups. The feature is launching today on Instagram’s iPhone and Android apps. 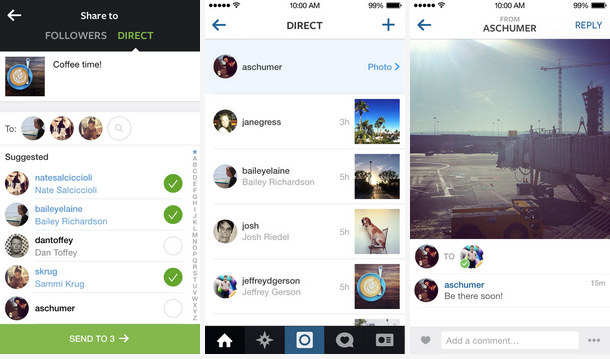 You’ll be able to instantly send Instagram Direct messages to people you follow. If they’re not following you back, your message goes into a pending inbox for their approval (the company wisely chose not to let you see those images without approving them, which should protect you from inappropriate things). You can send messages to up to 15 people at once, and at this point you’ll still need to share actual images — Instagram isn’t going to offer full text messaging yet (and hopefully, not ever).

Instagram has also dramatically revamped its commenting feature for these photos, so now you can have more in-depth conversations with friends and easily add emojis (those cute little pictures your teenager is probably addicted to). 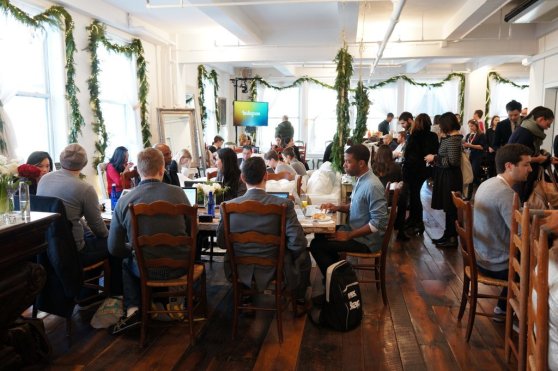 Above: The Instagram Direct event was a swanky affair in NYC

While Instagram is certainly competing with plenty of other mobile messaging apps that allow photo sharing, the company is perhaps most directly targeting MMS messages (sending photos through the texting function on your phone). Since every phone with a camera offers MMS, it’s also reliable for sending photos to people on other platforms (and even people with older feature phones).

With Instagram Direct, Instagram is cementing itself as the sole photo sharing solution for smartphones. Systrom revealed that more than half of Instagram’s 150 million monthly active users open up the app daily, which is a shockingly high engagement rate compared to most apps. Now with private messaging, expect that number to climb even higher.

The news also follows Twitter’s recent refocus on its private direct messages, which included the ability to send photos privately to people. The two social networks likely won’t compete much when it comes to private photo messages — Twitter is still focused mostly on short text updates, while Instagram puts photos front and center — but the proximity of these updates is a sign that mobile messaging is a space to watch right now.

When it comes to that 15 person limit, Systrom said he never envisioned the feature as a way to spam all of your friends. Instead, the limit helps you keep conversations more focused. He also stressed that this is still version 1.0 of the feature — Instagram didn’t want to build too much into the direct messages just yet, and it’s also paying attention to feedback from its users for future ideas.

Systrom is also not too worried about the Instagram Direct messages getting in the way of people sharing public photos: “I think Instagram was tackling a very specific part of photo sharing, specifically public photo sharing,” he said. “As we all got used to having these cameras in our pockets, sometimes you see something and it’s not really meant for a larger group. … Now there’s some sense of self-curation.”

While he didn’t have anything to announce regarding monetization efforts today, Systrom hinted that Instagram is working on an upcoming announcement to reveal more specifics. He described the plans as “slow” and “organic within the platform,” so you can at least expect Instagram’s upcoming ads to be pretty.

Though earlier rumors suggested that Instagram was working on an ephemeral photo sharing feature, similar to Snapchat’s disappearing pics, Systrom explained that he didn’t feel disappearing images was the right solution for Instagram:

“I think there’s definitely a space for ephemerality in general,” he said. “Instagram is focused on capturing the world’s moments, what I think we’re best at is archiving those moments and sharing them with your friends … If they’re [the images] not there anymore, it’s hard to have that conversation.”