YouTube is expanding beyond its role of being an online video hub. The Alphabet-owned company announced on Tuesday that over the next few months it will launch YouTube TV, an online cable bundle with all the networks and dozens of cable networks. For just $35 per month, you’ll have not only access to all the YouTube content, but also live shows and programming from 40 networks, including sports and news with membership for up to 6 people.

Some of the networks that are included are ABC, CBS, NBC, FOX, USA, FX, FreeForm, Disney, ESPN, Fox Sports 1, NBC Sports Network, MSNBC, CNBC, Fox News, and Fox Business. You can also add on channels such as Fox Sports Plus and Showtime. 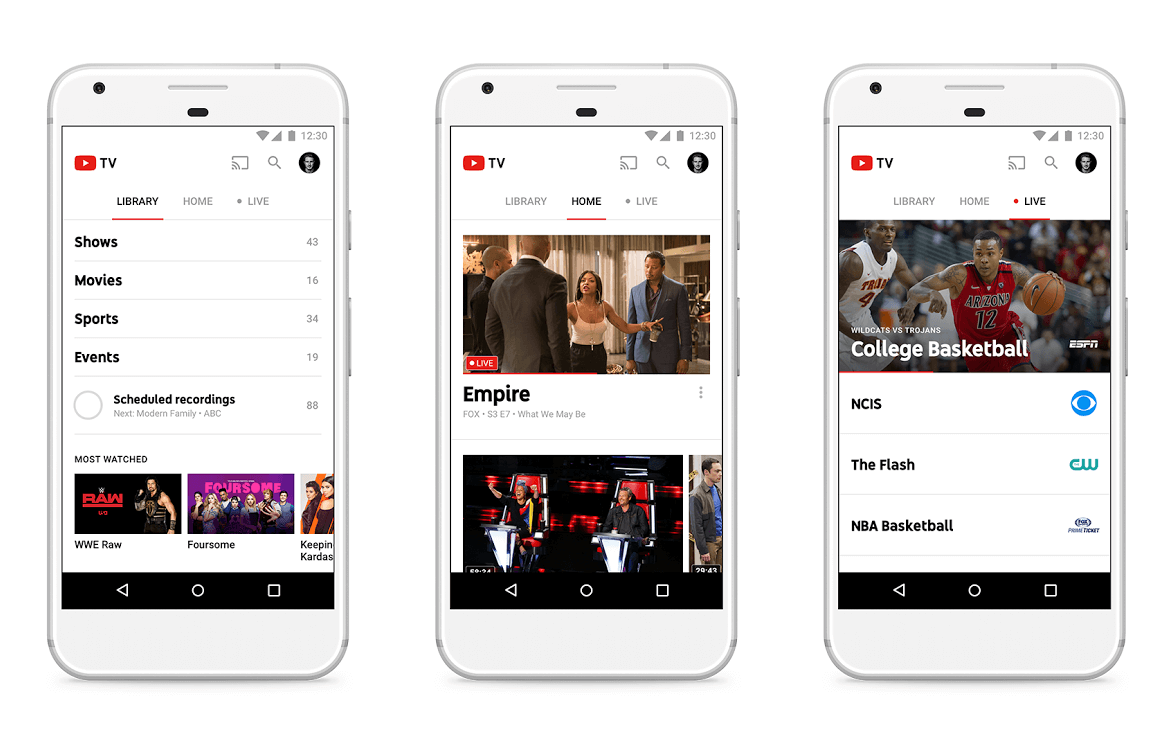 Company CEO Susan Wojcicki took the stage at a press event early today to share the evolution of media to cater to the needs of the “YouTube generation.” From traditional TV to online video and now smartphones, people’s consumption of shows and content have greatly changed. “There’s no question that millennials love great TV content, but what we’ve seen is that people to don’t want to watch it in traditional settings. They don’t want to wait for their favorite show to come on,” she remarked. “Young people want to consume content online, live or on demand, so they can watch when they want, on any screen so they can watch where they want, on their terms, so they can watch how they want.”

YouTube TV is available through a mobile app. You can cycle through shows in the interactive guide and, with the swipe of a finger, can instantly begin watching. There’s also a cloud-based DVR that lets you record endless hours of shows and series you care about. But if you don’t want to watch on your phone, you can use Google’s Chromecast and Cast-enabled devices to stream the show or movie to a bigger screen. 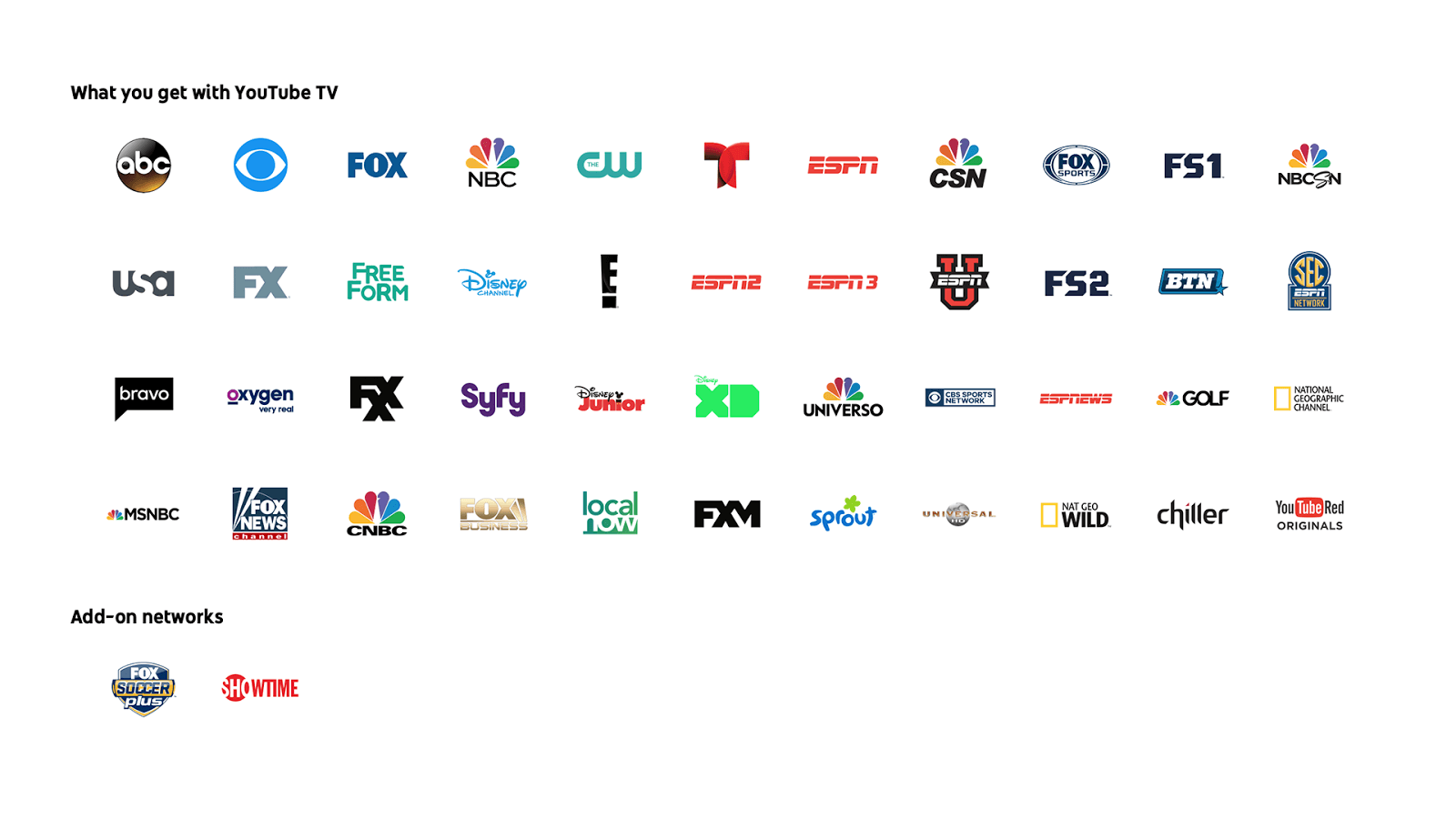 Reports about this service go as far back as May 2016 where it was said the company was working on a way to bundle cable TV channels that were streamed over the internet. At the time it was labeled YouTube Unplugged, but obviously that has changed. At the time, sources told Bloomberg that YouTube was in discussion with major media companies, including NBCUniversal, Viacom, 21st Century Fox, and CBS.

By creating this service, YouTube is entering a market that includes competitors such as AT&T’s DirecTV Now, Sony Playstation Vue, and Sling TV. The service will roll out piecemeal across the U.S., probably due to rights issues YouTube and others in the space are dealing with.

Readers will notice that some channels and networks are noticeably missing, such as those from Time Warner. YouTube said that it’s always in discussions with new partners, but does not anticipate raising the price beyond the $35 monthly fee. 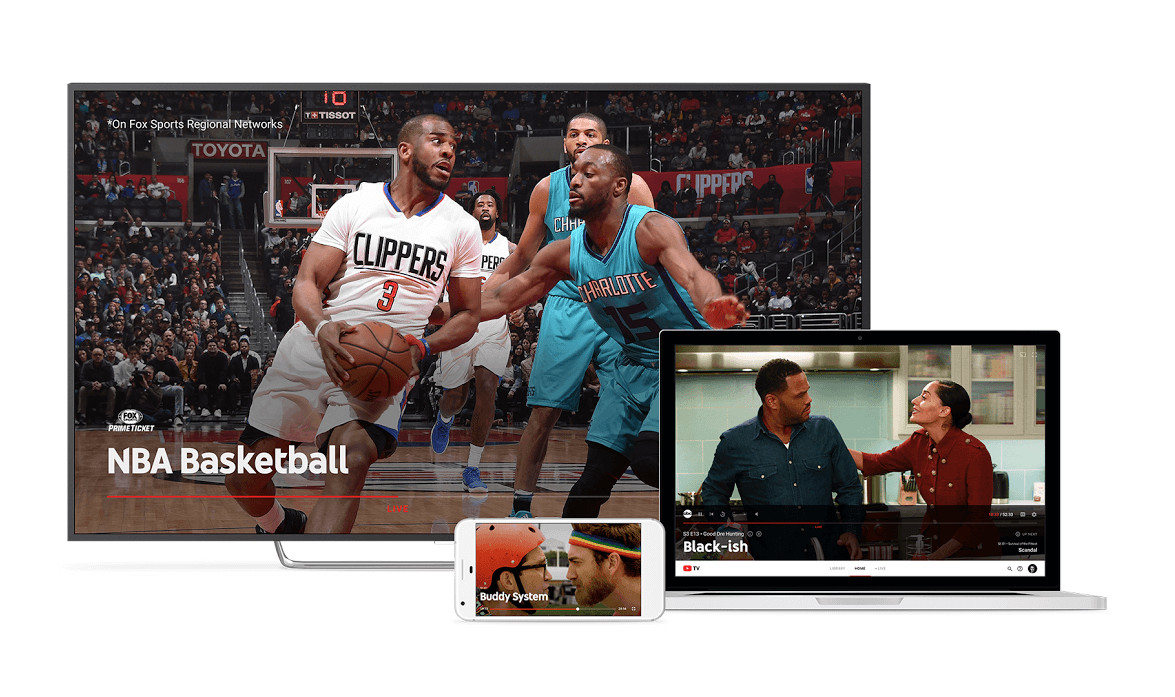 Above: YouTube TV will work on mobile, desktop, and TV.

While it might be simple to think that YouTube is just incorporating content from TV and cable networks, there’s more to this story — specifically leveraging the online video service’s machine learning and personalized recommendation to surface the right shows you might be interested in.

The traditional TV experience is one where viewers are inundated by a TV guide where you’re trying to find out what to watch. Instead of a “pray and spray” mentality, TV providers including Comcast’s Xfinity have been using artificial intelligence and machine learning to highlight recommendations. So if you’re interested in Law & Order, for example, YouTube TV might show you other crime dramas from the show’s creators or that also air on NBC. Recommendations will be based on your use, along with viewing behavior on the main app.

Soon, Google Home and Google Cast voice commands to control what you’re watching within YouTube TV will be supported. The demo of this coming-soon feature was glitchy, so we’ll have to wait and see how a more stable example will function. There are also plans to potentially bring YouTube TV to other devices, including game consoles and gadgets that YouTube already streams on.

However, there may be instances where content won’t be available due to pre-existing agreements, such as Verizon’s block of Sunday Night Football.

YouTube TV isn’t going to be ad-free, even if you’re paying $35 per month. The company plans on featuring ads like it normally does, but now that it can tap into a larger screen, there’s more real estate and even additional content to market against. So it’s likely that more ad opportunities will arise out of this new offering.

YouTube chief product officer Neal Mohan said his company is going to sell ads, while content partners will also sell. “We view this as the beginning of the journey. We think content partners think there are ways to improve the overall ad user in terms of relevancy, over time,” he added. The company hasn’t gotten into the specifics, but says ads will be sold across all channels, not just YouTube TV.

How much YouTube is paying networks to license programming remains unknown.

After more than a decade, YouTube is now considered a significant rival to traditional television. It has launched stars and given rise to the influencer and creator movement, while also being a hub for new opportunities through its YouTube Red subscription service. The company said that more than 1 billion hours is being consumed daily globally, a figure that has grown 10 times since 2012 and comes dangerously close to television viewership in the U.S. Unfortunately, this number hasn’t been broken out into U.S.-specific levels.

Today’s announcement comes on the heels of YouTube’s announcement that it was bringing its video social network to Comcast’s Xfinity X1 platform later this year. And as it faces more competition not just from traditional media, but from like-minded services including Facebook, Twitter, and Snap, there’s an opportunity for YouTube to expand its reach and show its dominion over the video space.

Netflix and Amazon have already seen good growth and adoption of its original shows, including some that have received acclaim and top honors at the Academy Awards and the Emmys.

Offering a virtual cable bundle could also provide networks an additional opportunity to attract younger audiences to their shows, many of whom have opted to cut the cord and abandon cable entirely in favor of the internet and streaming services. YouTube’s attractiveness to this demographic could be an asset.

“The long-term vision is to reimagine how television is watched,” Mohan remarked.