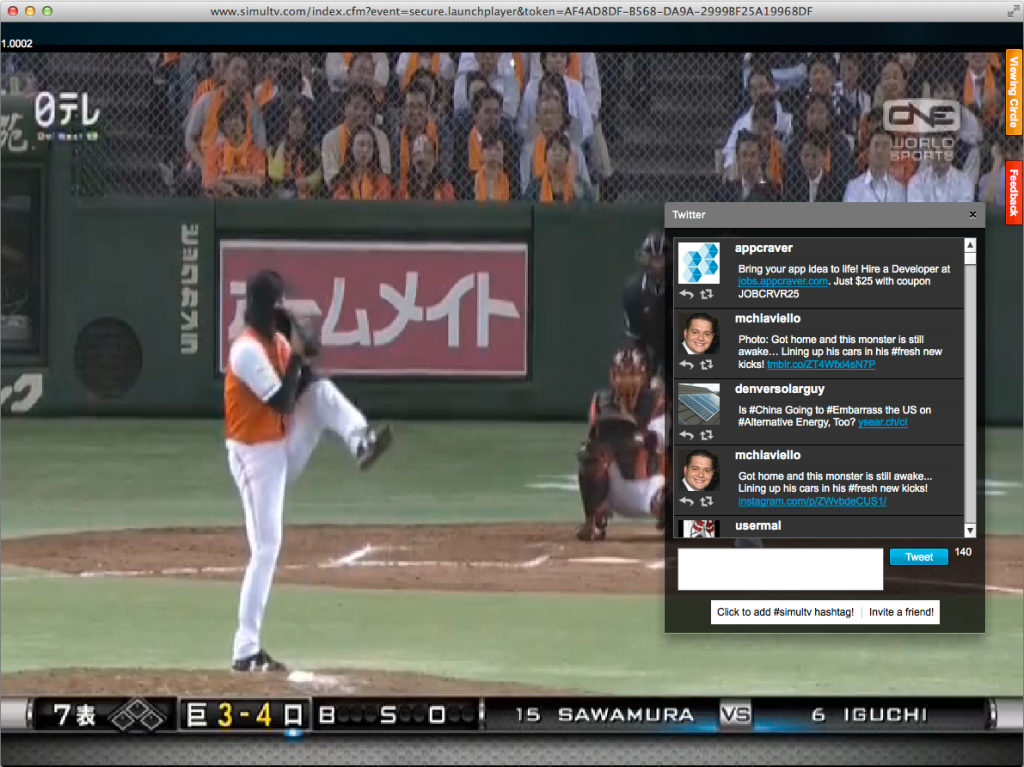 Who needs a second screen when you can use one screen to watch, share, and see what others are saying about life television entertainment? Today SimulTV launched a new online TV-viewing app that integrates social, eliminating the need for two screens.

“SimulTV puts the social in TV – literally – by merging the second screen with the first,” the company says.

The second screen is the biggest phenomena in traditional media, supposedly. Forrester says that 85 percent of tablet owners in the U.S. check social media while watching TV. It’s such a big phenomenon that TV Guide rolled out an app to see what’s playing, watch whatever’s on, and also tweet, post, and blog about it. And that Apple is rumored to be releasing a mini-TV tablet to enable an iOS-style second-screen experience.

Of course, when I go to watch TV, I go to chill, or to immerse myself in a story … not to tweet about it or share. But I am, admittedly, not 20 anymore.

For those who want to stay socially connected while watching the big game or the last episode of can’t-miss-TV, SimulTV’s solution is to combine both screens, right on the web. So your football game, Twitter conversations, Facebook messages, online search, and text and voice chat with others on SimulTV who are watching the same thing as you.

“If you’re using two screens, you have to take your eyes off the football game or reality show you’re watching and go to your second screen when you want to complain about a penalty or celebrate with your friends when your favorite contestant wins the game,” Steve Turner, founder and president of SimulTV, said in a statement. “That means you are either watching or interacting, but not doing both.”

There’s something to what he’s saying.

I tried the service myself, and besides the fact that it’s Flash-based — at least the code that asks for control of your microphone and webcam in order to participate in on-site chat — and fairly processor-intensive, it seems useful and a better solution than a standard two-device second-screen setup.

Currently, there are only a few channels, but by this summer, SimulTV promises to have more than 100 channels, including “top channels” from Latin America, China, Japan and Europe, plus 5,000 video-on-demand titles. The service is HD-quality, with picture-in-picture for the truly ADHD social TV aficionados, and according to the company, takes only half the bandwidth of typically required.

Most importantly, however, SimulTV is a service that — depending on the channels the company actually brings on this summer — allows you to cut the cord and simply use your computer or tablet to watch TV.

The service will be free initially, and eventually will cost between $5 and $20.