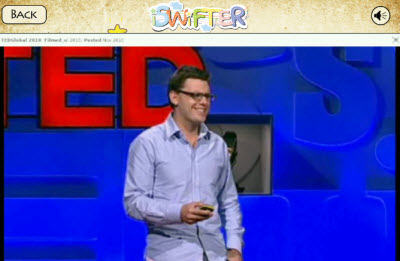 Following through on its promise, iSwifter has launched an app on the iPad that lets users access Flash content.

Apple and Adobe are still patching up their differences over the Flash multimedia platform. But iSwifter has figured out a way around the current stand-off by streaming Flash videos to Apple mobile devices. In doing so, iSwifter could have far-reaching consequences in the increasingly fragmented mobile markets. In September, iSwifter launched its app with a handful of Flash games. Now it has added access to sites with Flash videos.

In some ways, iSwifter competes with SkyFire, which launched its 2.0 browser app on the iPad to let users access Flash-based video web sites. But SkyFire’s app had to be pulled down last week because the company didn’t have the resources to meet demand for the app. Users were using the browser so much for viewing video that the company had to place restrictions on the quantities of browser downloads it would support.

iSwifter avoids running into the same kind of problem that SkyFire had by limiting access to just a handful of videos sites on the iPad. The good thing is that those Flash sites give users access to thousands of videos on the iPad. They include Ted Talks, with lectures by the tech elite; Muzu.TV music videos; Jambo Media sports videos; Green TV with videos on the environment; All Things Science science videos; Yahoo Blogs with tips and video hints on the Angry Birds iPhone game; WatchDoIt how-to videos; and Ignite Show tech presentations. The full iPhone version will come later. (Pictured: Tom Chatfield, an arts and books editor at Prospect, gives a Ted Talk).

iSwifter is a new Burlingame, Calif.-based entity that is part of YouWeb, the technology incubator headed by Peter Relan, the chairman of CrowdStar, Aurora Feint and Sibblingz. iSwifter has created a Flash streaming service that is operated in the cloud, or web-connected data centers. With iSwifter, game developers can find a way to get their content from one platform to another, even if there is an obstacle standing in their way. The same is true for Flash-based video web sites.

“We think there will be a lot of demand for Flash-based video sites on the iPhone,” said Peter Relan, chairman of YouWeb.

The iSwifter app is kind of like a portal. You download it to your iPad and then it gives you access to a number of games stored on its servers. Those games are typically played with a mouse and keyboard on the web. But iSwifter has selected a number of videos and games that will work with the iPad’s touchscreen interface. While Apple does not allow downloadable Flash games on the iPad or other mobile devices, it has approved iSwifter. With iSwifter, the first 2,000 downloads are free and then it is a paid app.