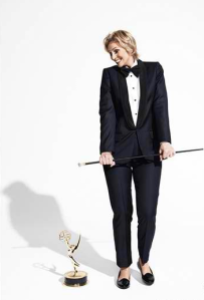 You can, however, watch live red carpet and backstage video with the help of San Francisco-based Ustream. The backstage webcast starts as soon as the show gets underway on Fox. Usteam, an interactive broadcast company, got involved with the 2010 Emmys. That was also the year the award show started integrating Facebook and Twitter into its coverage. The 2011 Emmys will have even more of a social media base because of executive producer Mark Burnett. He’s the EP behind socially-conscious shows like Survivor, The Apprentice and The Voice.

The award show has a free Emmys app for iPhone and iPad, which provides real-time updates of all category winners. The best part about this app for iPhone is the IMDb-like ability to search for award nominees and see what shows they’ve been in before, previous awards they’ve won, as well as photos and videos of the nominees. The Emmys app also aggregates social media activity about the Emmys, with the ability to connect to Facebook, Twitter and YouTube. 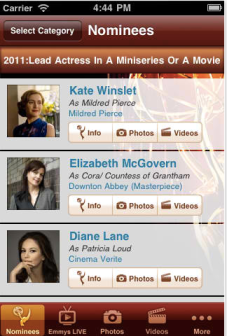 A super cool feature for the Emmys iPad app (I cannot believe I just typed that) is the audio sync feature that uses the noise around you to detect where you are in the broadcast and then sync your iPad to that moment. Once synced, the app displays related content as the show progresses. You can see nominee biographies, videos, fashion information, trivia, red carpet photos and backstage news.

If you don’t have an iOS device, this year Mashable is getting in on the Emmys conversation. The blog has a Emmy chat board on its website, if you feel inclined to comment on what people or wearing or who was robbed of an award.

The official Twitter hashtag for the show is #EMMYS. E! has compiled a Twitter list of shows, nominees and presenters. May I suggest following: @ConanOBrien. His most recent tweet: “I’m going to streak the #Emmys today. Look for my red carpet on the red carpet.”