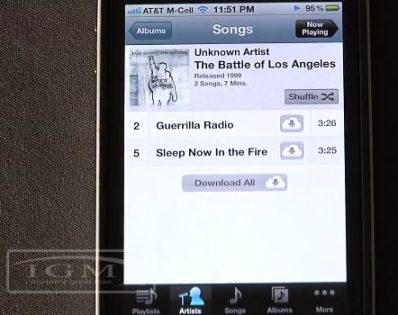 Update: An Apple representative tells All Things Digital that iTunes Match doesn’t technically stream music, instead it’s downloading and playing songs at the same time. This means that unlike an actual streaming solution, your iCloud music and video will still need to be stored on your device somehow. Original post below.
—

iTunes Match, Apple’s new service that lets you easily synchronize your music library to iCloud, will indeed let you stream music from the cloud, despite Apple’s reluctance to announce the feature when the service was initially announced.

Videos from the site Insanely Great Mac (see below) give us our first glimpse at exactly how iTunes Match works. Basically, you’ll be able to download music to your devices from iCloud or choose to stream music instead. iTunes Match was made available to developers last night who are beta testing iOS 5, Apple’s upcoming iOS update.

What’s strange is that Apple made no mention of streaming capabilities when it announced iTunes Match in June, leading many to assume it would only let you download music files from the cloud. Perhaps Apple just didn’t have the licensing deals for streaming in place at the time, or the feature just wasn’t ready to show off. It’s also worth noting that the videos below show an iPhone running over Wi-Fi — it’s conceivable that iTunes Match won’t allow you to stream music over cellular connections.

iTunes Match costs $24.99 a year and, unlike Google Music or Amazon’s Cloud Music player, it scans your computer and matches it with songs in iTunes’ massive library, granting you access to the songs without actually uploading them. Google and Amazon’s offerings, on the other hand, make you upload your entire music library before you can listen to it via those cloud services.

With streaming capabilities confirmed, iTunes Match suddenly looks even more compelling than it did initially. It’s also a great way for Apple to keep up with streaming music services like Spotify, which charges $10 a month for full access to its music library.