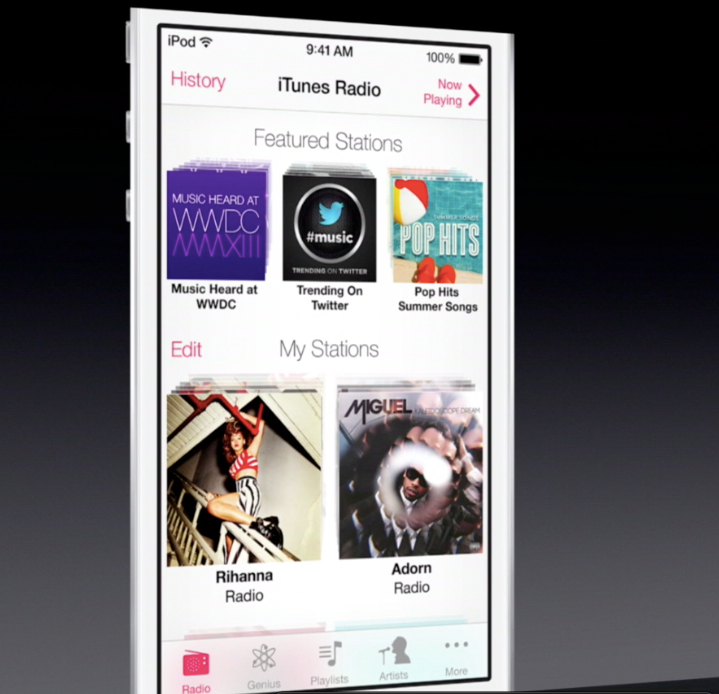 The service itself functions quite a bit like Pandora, letting you create smart radio stations based on a song or artist that’s already within your music library. Apple said its already providing hundreds of smart radio stations based on genre, which is something Pandora also offers. One feature that I think merits some credit is the way Apple invites its users to see upcoming songs, and favorite the songs that it likes on a particular station. Again, nothing new (Pandora does this with thumbs up/down), but it looked very pretty in the demo shot.

Other things that were prominently displayed when new songs pop up in the station is the price for the track if you were to purchase it — obviously a main priority for Apple because it doesn’t want the streaming service to completely cannibalize digital music sales.

As for pricing, Apple is offering iTunes Radio for free to everyone as an ad-supported service, backing up rumors about how Apple will monetize the service. It’s available on all Apple devices, and users who already subscribe to the company’s music library backup service iTunes Match will get to experience iTunes Radio without advertising. Presumably, the fees Apple was paying to music labels for iTunes Match will just carry over to the new radio service as well.

The radio service debuts as part of a slick new music player user interface that’s definitely worth some attention.

Check out some screenshots of the new radio service and revised iOS music player embedded below.