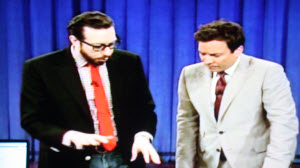 Joshua Topolsky, the former editor of Engadget, appeared on the Jimmy Fallon talk show tonight to talk about tech gadgets and unveil his new tech enthusiast site The Verge.

Topolsky joined the late-night talk show host and showed off a bunch of gadgets such as the Olympus E3 camera, which reportedly has the fastest autofocus of any camera. Topolsky said his web site, www.theverge.com, will debut in the early fall.

Topolsky left Engadget, which is owned by AOL, after a memo circulated that put more emphasis on getting page views than reporting news in a journalistic fashion. He recruited a number of other writers and editors from Engadget and got backing from SB Nation. 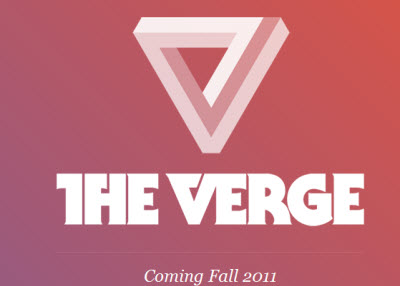 In a note on his personal blog, This is my next, Topolsky said:

Yes folks, the rumors are true. Extra true. Super true. Our new home come fall-time will be called The Verge. Why The Verge, you ask? Well put simply, I don’t think a single idea better defines the news we cover or the way we cover it. Everything that we think about, talk about, and dream about is on the brink, the cutting edge … the verge. Even when we’re looking at or reviewing familiar products, our angle is not just about what that technology means now, but what it means up ahead. Our goal is to communicate what the complex and sometimes confusing roadmap for the future looks like in understandable, approachable ways. We want everyone to know and love technology the way we do, and we’re working hard every day to make that possible.

The site will launch early this fall, and we couldn’t be more excited to show you guys what we’ve been hammering away on. Until then, we’ll keep doing our thing here at TIMN … and don’t worry, we won’t completely leave our interim site behind when we start the big show. As we make the switch, however, we’ll be converting our Facebook and Twitter accounts over to The Verge, so no one loses the thread once we jump.

Sure, it’s a lot of action all at once, but it’s going to be a fun ride. We’ve got lots of good stuff up the road, and we feel super lucky to have such an awesome gang of readers joining us on the trip. Thanks!