Thanks to Kanye West, no one can accuse the streaming music industry of being dull. With just a few days, and several dozen tweets, West has turned the digital music world upside down.

But in doing so, his biggest victim may yet be the very target he intended to help: Tidal.

Quick recap: West announced last weekend that his new album, “The Life of Pablo,” was going to be available exclusively for sale as a download from his website and the artist-driven streaming music service Tidal.

When the news sent Tidal rocketing to number one on the U.S. Apple App Store, West pulled the album from his site. The album was supposed to be available from Apple Music (and probably other streaming sites) after a week.

But, yesterday West tweeted that he had changed his mind.

Problem 1: TechCrunch reported that thousands of users had been charged for buying the album but had never received it. Tidal, which acknowledged the problem, said it is working to either give refunds or eventual access. But if the album’s never going to be available for sale (per West’s tweet), then it seems like Tidal is just stuck handing out refunds.

Problem 2: Many people did download it. And some of them then uploaded it to piracy websites. And thus, it has become one of the most-pirated albums ever, according to TorrentFreak. The site said that at least 500,000 people have already illegally downloaded a copy.

“At the time of writing close to 10,000 people were sharing a copy of the most popular torrent simultaneously, something we haven’t seen with a music release before,” said TorrentFreak. “Aside from torrent sites, the album is also being widely distributed on various direct download services and hosting sites, increasing the overall piracy numbers even further.”

Problem 3: Fans are responding to the situation by mocking West and Tidal, including many fans who are showing screenshots of their copy of the album in Apple Music. Presumably, these people either got a pirated version, or they managed to be among the few who bought the download from West’s website before that access was switched off.

All of this is taking the luster off what should have been a gonzo success for Tidal, the kind of success that the company desperately needed.

Just look at this chart from Sensor Tower, which monitors App Store downloads, and you can see how far behind Spotify Tidal is on a daily a basis (and how West instantly closed that gap): 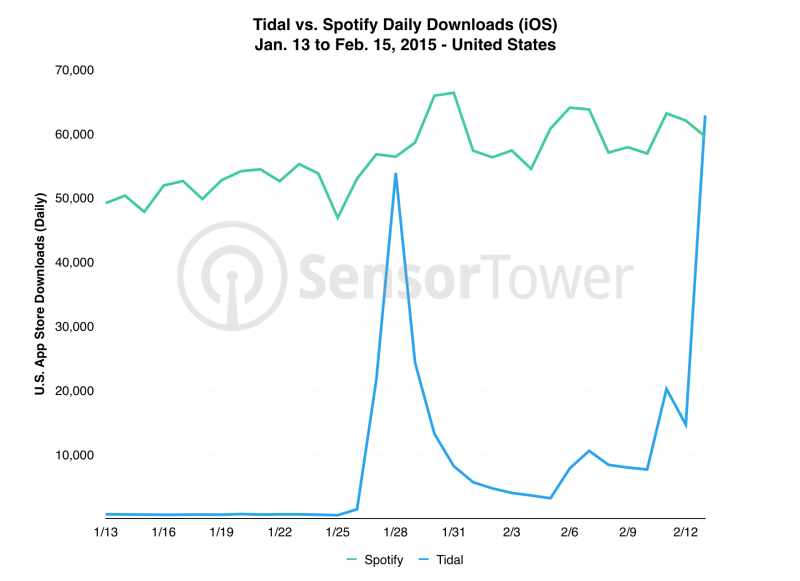 That other spike on this chart was thanks to the exclusive release of Rihanna’s album. It shows how big and brief that momentum can be. And downloads do not equal subscribers. Tidal needs those people to sign up and stick around.

Of course, West revels in controversy, and his career and image will be just fine. But the same probably can’t be said for Tidal.

Tidal’s image is likely to take a hit with consumers who would prefer something more stable and reliable, like Apple Music or Spotify. And once burned, it’s going to be hard to get consumers to give Tidal another shot, even when the next exclusive lands.