For entertainment studios around the world, Kim Dotcom probably looks a lot like King Henry VIII. To them he is rich, rotund, and chopping their businesses off at the head.

Two of those attributes, at least, are factually true. The third is in legal dispute.

Kim Dotcom, the founder of recently indicted file sharing company Megaupload, was born Kim Schmitz. A German native who legally changed his surname to Dotcom ten years ago, he has a speckled past. This includes accusations of credit card fraud and criminal hacking, as well as a confession of embezzlement. Now Kim lives in a New Zealand mansion allegedly worth $30 million and owns high-end vehicles like a Rolls-Royce, a Maserati, and a Lamborghini.

It’s all legitimately-acquired wealth, according to Megaupload spokesperson Bonnie Lam. 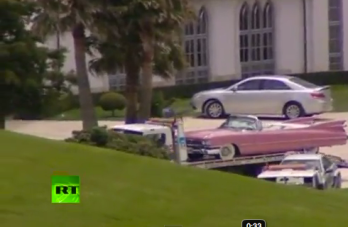 In accordance with German’s “clean-slate” law, Dotcom’s record has been wiped clean of his previous offenses, and he has paid his due after his convictions, Lam said.

“He has matured, learned from his past mistakes and is a successful businessman,” Lam told Cnet. “Kim is one of many shareholders at Mega and not involved in most day-to-day business decisions.”

He is, nevertheless, a colorful character. Dotcom co-produced and appears in a popular promotional video for Megaupload that came out in December, 2011 (that’s him in the screen shot above). The video, which included such popular music stars as Macy Gray, Will.i.am, Kanye West, Kim Kardashian, Serena Williams, Snoop Dogg and a host of others, was targeted by Universal Music Group for unspecified reasons, briefly removed from YouTube, and then reinstated to the popular video-sharing site shortly afterward. Megaupload filed its own suit against Universal immediately after the incident. The video has now been seen almost 12 million times.

Dotcom, who is married and a father of three, was charged this week with five counts of copyright infringement, along with money laundering. He was arrested at his own birthday party on Thursday, along with other employees of Megaupload and its various properties, including Megaporn, Megavideo, Megaclick, and Megarotic. When the police came calling, he barricaded himself inside the mansion’s safe room with what appeared to be a sawed-off shotgun.

Megaupload is the company’s flagship site, founded in 2005. It lets people upload, store and transfer files around the globe, a service that can be used for legitimate purposes (transferring a large data file to a business associate, for instance) but which, the FBI alleges, is also used for distributing copyrighted video and audio. The company’s headquarters are said to be in Hong Kong, though its servers exist in other countries as well. The US FBI took action after discovering servers in Virgina holding unlicensed copyrighted material. Indeed, the US calling this a “Mega Conspiracy.”

The indictment served yesterday listed assets owned by Dotcom and his fellow employees, which tallied to around $175,000,000. Expensive vehicles, artwork, electronics, and a laundry list of bank accounts were named.

On Friday, police in New Zealand raided Dotcom’s home and seized many of these assets, including a Rolls Royce, numerous Mercedes-Benz cars, cash and allegedly guns. Dotcom is known for enjoying his fast cars and attending the Gumball 3000, an automobile “rally” that has drawn celebrities such as Snoop Dogg, Johnny Knoxville and others.

In response, the loose hacker collective known as Anonymous retaliated by taking down the Department of Justice and FBI websites with a denial-of-service attack. 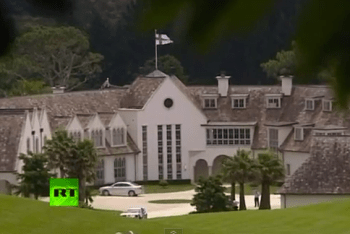 Dotcom has been in trouble with the law for money before. In 2001, the Megaupload founder pocketed 1.5 million euros after promising to invest 50 million euros into failing company LetsBuyIt.com. He pulled the fraud off by purchasing 375,000 euros worth of stock in the company, made his investment announcement, and watched the stock price soar. After the stock had climbed a considerable amount, Dotcom cut and ran, having never possessed enough money to make the 50 million euro investment in the first place. In 2003, Dotcom admitted to embezzlement and was flown from Thailand to Germany for the trial.

According to New Zealand-based website 3 News, New Zealand’s government initially denied Dotcom’s application residency when he failed a “good character” test. However, he then donated to the Christchurch Earthquake Fund and invested $10 million in government bonds, and his application was subsequently approved.

Now Dotcom is facing even more financial charges. He and his alleged co-conspirators are accused of paying third parties to upload copyrighted material.

Dotcom remains positive, however. When faced with three of his coworkers before the press in a New Zealand court room, he invited pictures and video. When a lawyer asked the press to stop, Kim Dotcom interjected with, “We have nothing to hide.”