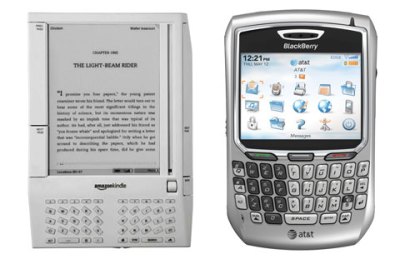 The first-generation Kindle e-reader was a revolutionary device, but it was far from pretty. Now the reasoning behind that ugly design has become a bit clearer: Jeff Bezos pushed his designers to replicate elements of his beloved BlackBerry, the New York Times reports.

“Jeff Bezos would come into our design meetings and say he loved his BlackBerry and the ease with which he could find e-mails and respond to people,” a former Amazon designer told the NYT. The BlackBerry’s design influence led directly to the original Kindle’s boxy design, keyboard, and scrolling wheel on the side.

Thankfully, Amazon quickly grew out of that design. Over time, the Kindle became slimmer and less boxy. The most recent Kindles, including the Touch and the new $79 model, don’t even have physical keyboards.

Now with the Kindle Fire tablet, it appears that Amazon, much like the rest of the tablet competition, is trying to imitate Apple’s iPad. “You can’t get much more minimal than a black rectangle,” Tumblr user interface designer Justin Ouellette told the NYT.

While there’s probably not much more Amazon can do with its future tablet designs, I’m interested in seeing just how far the company can push its e-readers. Amazon’s latest e-readers look different from competitors like the Nook and Kobo, and there’s still plenty of room for Amazon to pursue even lighter and more innovative designs. I can’t wait for a flexible color E-Ink Kindle.