If you thought Google’s plans for the TV were wholly focused on its cheap Chromecast streaming stick, then think again.

Google is apparently hard at work on a new media platform, dubbed Android TV, that will help give you easier access to movies, TV shows, music, and more from your television screen, according to leaked documents obtained by The Verge yesterday.

We first heard about Android TV way back in October after photos of unreleased devices from LG showed off the new branding. Android TV seems to be the successor to the company’s attempt at set-top boxes featuring the rather redundant Google TV branding. However, it’s also more than that, according to the leaked docs.

“Android TV is an entertainment interface, not a computing platform,” said Google in the docs. “It’s all about finding and enjoying content with the least amount of friction.”

If that’s true, it would succeed well beyond its Google TV predecessor, which was more or less trying to revolutionize your entire TV experience. Most people only care about the content, and are willing to navigate though multiple streaming services (Netflix, Hulu Plus, Pandora, etc.) to get it. If Google can make this process easier though Android TV, people might actually start using it.

As you can see from the screenshots above and below, the Android TV interface looks like it borrows quite a few elements from Microsoft’s Xbox Live. Android TV also shows support for a bevvy of third-party apps, including Hulu, Netflix, Sonzga, Pandora, YouTube, and Vevo. There’s also support for native Google services like Hangouts, too.

We don’t yet know if Google plans to build its own device to showcase the Android TV software, or if it plans to rely solely on hardware partners like its done in the past with Google TV. Either way, consumers will be getting some superior media technology in the (hopefully) near future. 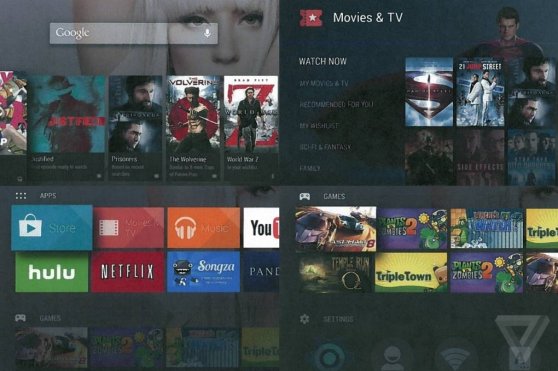 Above: Screenshots of what could be unreleased Google project Android TV.