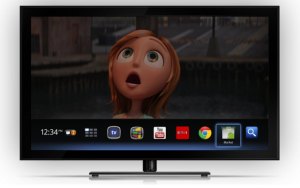 Electronics manufacturer LG may create a Google-branded television set that would run an unreleased, future version of the Android-based Google TV software.

The Google TV software — which currently runs on a variety of set-top boxes from Logitech, Sony and others — allows regular television sets to gain access to content on the Internet. It also helps organize that content so it can more easily be found and consumed, and adds support for developers to create TV-specific applications.

Both LG and Google are currently in talks about the deal, but no final decision has been made, according to a Bloomberg report that cites anonymous sources familiar with the LG and Google TV project.

The potential Google-branded LG TV set (not to be confused with the line of products LG debuted at CES 2012, which run the current version of Google TV) will mimic the partnership Google has previously forged with Samsung on the Nexus line of smartphones. This basically means that the Google-branded “Nexus TV” would run a pure version of Google TV software, without any bloat or add-ons from the manufacturer. This isn’t the first time we’ve heard news about Google working with a partner to produce a “pure” GTV set either. Back in November Google was rumored to be in talks with Samsung on a similar TV set agreement.

I have to admit, I really like the idea of a “pure” Google TV set and I’d probably end up spending a bit more money to buy one. Ultimately, my decision would come down to whether or not that television set would be able to upgrade to newer versions of Google TV, which would undoubtedly extend the life (and usefulness) of the TV. Yet, with people already replacing their TVs less frequently, I’m sure TV manufacturers are probably nervous about that prospect.