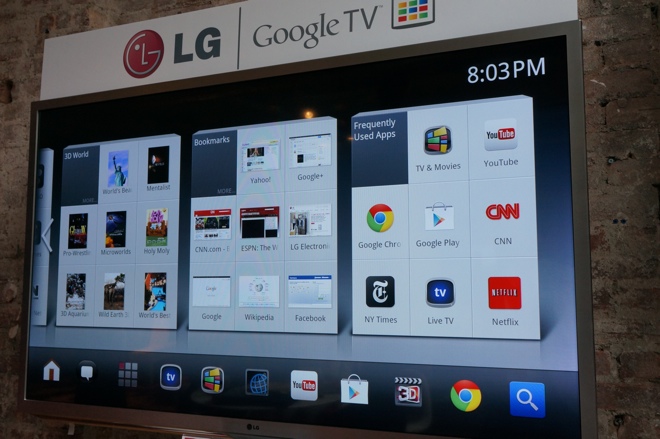 When we first learned LG would be launching its crop of Google TV sets this month, I asked “will anyone care?” — now after seeing LG’s G2 series in action, I’m surprised to report that plenty of consumers just may.

With slick motion control technology and a speedy dual-core CPU, LG’s G2 sets are certainly the most powerful Google TV devices so far. LG also has the privilege of offering the first 3D-capable Google TVs. Even better, the sets are passive 3D, so you can use cheaper plastic 3D glasses instead of the expensive rechargeable variety.

The Korean TV-maker debuted its G2 Google TVs today at Internet Week New York, an annual event where NYC celebrates technology and digital culture. I chatted with Georg Rasinski, director of LG’s home electronics brand management, who was kind enough to demonstrate the G2 series for us (see below).

The Magic Remote itself feels nice, with a rounded portion that makes it comfy in your hand. There is a scroll wheel on the front, along with the most commonly used Google TV buttons, and a full QWERTY thumb keyboard on the back.

LG’s Google TV interface also looks dramatically different from the GTV devices I’ve used from Sony and Logitech. They’re running Google TV 2.0, but LG has also heavily customized the home screen with a 3D interface. It gives you quick access to a variety of apps and bookmarks.

The Google TV experience was noticeably faster on LG’s sets, which I mostly attribute to the company’s fast dual-core CPU. The G2 series is powered by LG’s custom ARM-based L9 processor, the first dual-core chip in a Google TV device. Eventually, the L9 will make its way to LG’s other flagship sets, but it’s making its debut on the G2 series.

Rasinski said that Internet Week ended up being perfectly timed for the Google TV launch. Last week, an LG exec announced that the company would begin building the sets this week, with retail availability to follow next week. That’s a fast turnaround for any company, but Rasinski tells me that LG wanted to roll out its Google TV offering as quickly as possible.