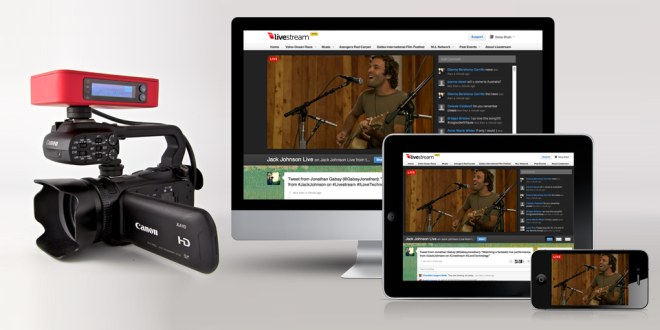 While it’s easier than ever to stream video from our phone these days, setting up a professional-looking video stream at an event is still overly cumbersome. The biggest problem is encoding video and getting it on the web, something that usually requires expensive encoders and direct access to a nearby computer.

Livestream aims to change all that today with its first hardware device today, the Livestream Broadcaster.

The $495 encoding box can plug into professional cameras and push high-definition video to the web via Wi-Fi, as well as 3G and 4G modems. The Broadcaster works together with the New Livestream Platform, which lets you broadcast an unlimited amount of video without ads for $45 a month. (In a wise move, the company includes three months of its streaming service when you buy a Broadcaster.)

It may seem expensive, but the company tells me that traditional live broadcasting setups could run upwards of $5,000, and they’d certainly be more than a mere $500. You also gain peace of mind by having a single device that integrates directly with Livestream’s service, instead of the hodgepodge of equipment you’d have to coordinate otherwise. The Broadcaster can also be used as a desktop encoder when connected to a video production switcher.

“Our goal isn’t to become a hardware company, our goal is to break the barriers of entry to make sure more people can live stream on our service,” Livestream CEO Max Haot told VentureBeat in an interview yesterday. “We don’t care if we make any money on the hardware.”

Haot tells me that the Broadcaster hardware is slightly subsidized, and his dream is to eventually give the device away for free. While the device will be sold online through the Livestream store for now, Haot said the next step is to get the Broadcaster into the sprawling B&H electronics store in New York City. Eventually, he hopes to get the encoder into Best Buy stores.

Getting the Broadcaster into stores isn’t just about shipping more units, it’ll also be a compelling way to make consumers aware of Livestream’s service, aside from word of mouth and online ads.

The Livestream Broadcaster plugs into video cameras via a HDMI port, and sits atop them using the accessory screw slot. It supports 1080i and 720p high-definition video resolutions (as well as 480i), and broadcasts 720p H.264 video with AAC audio at 2.3 megabits per second. That won’t be as sharp as a Blu-ray, but for streaming video it should look plenty professional. The device can be controlled directly, via an iPhone app, or through the Livestream website.

Haot tells me the Broadcaster was an objective for the past three years, but it was tough going since the company didn’t have any hardware experience. After finding an unnamed OEM partner more familiar with hardware, the company finally began to focus on creating the device at the end of 2011. The OEM took charge of the Broadcaster’s board and manufacturing (Haot said it was made in the U.S.), while Livestream developed the design, specifications, software, and remote app.

New York City-based Livestream has raised $12.5 million in funding so far and currently boasts over 30 million monthly viewers. Haot will be demonstrating the Livestream Broadcaster at the NAB Show in Las Vegas next week.