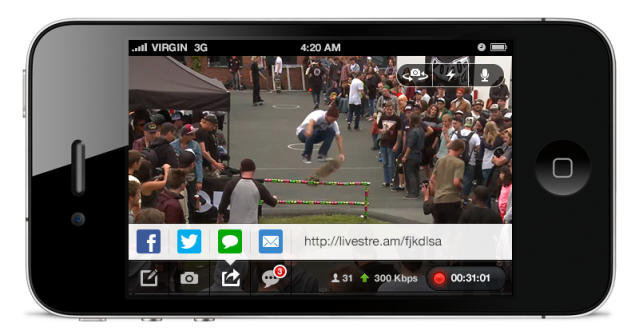 How do you stand out in the increasingly crowded live video-streaming market? In the case of Livestream, it’s by killing the ads.

Today the company announced that it’s offering free live video broadcasting access via Livestream.com and a new iPhone app, Livestream for Producers, without any ads cluttering the experience. That means no banner ads, no preroll ads, and no mid-roll ads (which always feel particularly egregious in live broadcasts).

“We’ve been in the business with ad-supported free streaming, but early last year we realized the user experience [with ads] was starting to get really disruptive,” Livestream cofounder and CEO Max Haot told VentureBeat in an interview yesterday.

At that point, he was unsure of just how productive ads were for a free streaming service, and he also noticed that competitors began using mid-roll ads. All of that led the company to consider an entirely new way of monetizing, similar to how Twitter avoided just plugging ads into your stream of tweets.

“We just believe that the winning platform … is one without ads,” Haot said.

Here’s how the new ad-free Livestream service works: Anyone can start broadcasting video via the company’s website, or the new iPhone app. You’ll no longer be able to embed free video streams, but you can easily share your link to the stream on Livestream.com. And once you have a stream saved, you’ll have access to it for 30 days. To watch your free stream, viewers will have to log in to Livestream, either with an account from the site or through Facebook.

If you need to archive videos longer than a month, or want to unlock the log in restriction for viewing your streams, you can upgrade to a producer account for $45 a month. It may seem like Livestream is trying to coax free users into the premium plan, but Haot tells me the company will welcome the influx of new free users as well.

“Ultimately, we really want to build the biggest live event community on Livestream.com,” he said. The company expects around 90 percent of users to stick with the free plan, while the rest will opt for the Producer Account or the original $269 a month Livestream premium account.

The new Livestream for Producers iPhone app marks the first time the company has offered live broadcasting on a mobile device, something that competitor Ustream has offered for some time. Livestream has mostly been focused on event broadcasting up until now, Haot tells me. The company spent a lot of time making sure the new iPhone app works particularly well on 3G networks, which often have limited badwidth available for video streaming.

Livestream still hasn’t revealed how it will unlock embedding videos under its new platform, but Haot says the company will announce more details in the next few weeks.

Livestream is based in New York City and has raised around $13 million in funding so far.