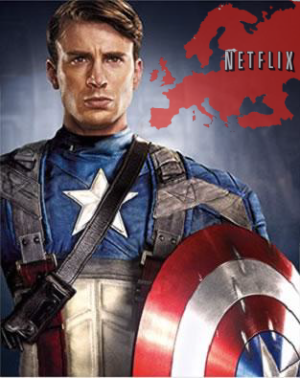 With increases in revenue and higher than expected subscriber growth, video rental service Netflix is once again the darling investment among Wall Street analysts (for the most part). However, not all the comments from Wednesday’s fourth quarter earnings results were positive.

Netflix warned of increasing competition against its domestic streaming service, while celebrating its shrinking DVD-by-mail business — two subjects analysts spend far too much time obsessing over. The biggest threat Netflix faces overall has nothing to do with business in the U.S. and everything to do with the success of the company’s expansion into the U.K., Ireland, Canada, and Latin America.

Failure in these new markets would easily drain Netflix’s resources and hinder its ability to renew costly content agreements, which are expected to get even more expensive. Part of what gives Netflix an edge over domestic competitors like Hulu Plus and Amazon Prime is its vast library of content. But it can only afford that library in the future if it is smart about its financing.

That said, Netflix is taking on big risk by expanding into multiple international markets. The company expects to take a $118 million loss next quarter in its international markets, while only generating about $40 million in revenue. During its earnings call, Netflix estimated it will take longer than two years for its Latin America streaming service business to become profitable. This is largely due to a “device wall” (a.k.a. the availability of connected devices capable of streaming Netflix) and a more diverse region in comparison to Canada and the U.S. Despite the slow start in Latin America, the company does seem back on track at home — with 24.4 million U.S. subscriptions.

It’s still too early to gauge the progress of Netflix’s U.K. and Irish streaming businesses, which launched earlier this month. These new markets, as well as Latin America, face stiff competition from Amazon-owned competitor LoveFilm. To become the top streaming service, Netflix must concentrate on growing content libraries in those new markets as well as increasing ad spending to boost total subscribers.

Netflix can’t afford for its expansion efforts to fail, but it can afford to endure competition in the U.S. for at least two years until the new markets become profitable.

Why Netflix can endure stronger competition (for a while)

In the earnings report, Netflix indicates that rival service Hulu Plus is likely to grow more popular in 2012. And while Netflix boasts a much larger library of content as well as a higher level of subscriber engagement (e.g. the total hours of video each Netflix subscriber watches), Hulu Plus does have access to the most recent television programming from major TV stations. Even if Hulu manages to obtain a competitive library of content, consumers are still more likely to choose Netflix because it’s an ad-free experience with identical monthly fees ($7.99).

Netflix was also particularly weary of online retailer Amazon, which offers a streaming video service for customers that subscribe to its annual Amazon Prime membership.

“We expect Amazon to continue to offer their video service as a free extra with Prime domestically but also to brand their video subscription offering as a standalone service at a price less than ours,” Netflix stated. Reasonably, it would take at least year, if not more, for Amazon to implement a standalone Prime video service worthy of competing against Netflix. Not only does Amazon Prime lack the variety of streaming videos available through Netflix, but it also isn’t available on nearly as many devices (smart TVs, set-top boxes, mobile OS apps).

It’s worth noting that both Hulu Plus and Amazon Prime aren’t trying to compete for Netflix’s DVD-by-mail rental service. Despite Netflix reporting that this portion of the business is shrinking and less profitable than streaming, it still represents a diversified channel of revenue for the foreseeable future.

Netflix also raises concern about cable TV providers shifting its service more in line with an unlimited library of OnDemand content to compliment its lineup of continuous live channels. But while cable subscriptions that include premium channels like HBO and Showtime can top over $200 in monthly fees, Netflix offers a comparable service that costs just $7.99 per month. I highly doubt cable TV prices will ever drop to levels that would make people give up Netflix — especially not over the next two years.

Provided it doesn’t decide to hike up subscription prices or spin-off part of its business, the best indicator for monitoring Netflix’s success is by determining the progress of its expanded international markets over the next several quarters.