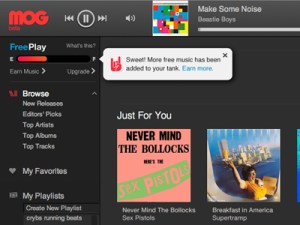 Subscription music service MOG on Wednesday announced it will launch a free on-demand component to its service tomorrow, in a move that will help it better challenge players like Spotify and Grooveshark.

MOG has been making a name for itself with unlimited streaming since 2009, but it has been slightly less prominent since Spotify’s hyped U.S. launch in July 2011. One of Spotify’s biggest assets is its free service, which lets users hear what Spotify has to offer while enduring some ads between songs. Now MOG can play on a similar plane and introduce more new users to its service, which has a library of more than 11 million streaming songs.

The new free service from MOG will be a little different than the simple ad-supported model Spotify is currently touting. MOG users will have what the company calls a “virtual gas tank” in the top left corner that tells them how much free music they have available for listening. To get more gas in the tank, users can perform actions like sharing playlists with friends on Facebook, referring friends to the service or listening to promoted artists in MOG’s library. MOG’s free service will be ad free for 60 days while users get acclimated.

The Berkeley, Calif.-based MOG last raised $9.5 million in funding in February 2010, with the round led by Menlo Ventures and Balderton Capital. It has raised $24.9 million total.

To me, MOG’s premium version is one of the best subscription services today, along with Spotify. Ever since MOG launched its slick HTML5 beta at the end of June, it has featured one of the best interfaces compared to its peers. Another area the service excels is sound quality, as it uses 320 kbps streams — something that is sure to attract audiophiles.

Will you give MOG’s free service a shot?