Bit.ly, the startup behind many of the shortened links you probably see in Twitter, just announced it has raised a second round of funding.

The New York company has endured repeated speculation that it will become irrelevant as bigger companies announce their own link shorteners (Twitter joined in most recently with the launch of its t.co shortener).

Despite the doubters, Bit.ly still appears to have the faith of investors, not just for its basic Bit.ly shortener but also the customized URLs that it’s offering publishers, including Amazon (amzn.to), Microsoft (on-msn.com), Yahoo (yhoo.it), The New York Times (nyti.ms), and NPR (n.pr). Bit.ly says users have clicked on its links 40.6 billion times this year. And as you can see in the chart below, clicks on Bit.ly links continue to grow (the blue line is daily clicks, the red line is the three-week average).

In describing its growth, the company wrote:

Bit.ly sits at the confluence of three broad market trends: the growth of content sharing via social services, the growth of mobile, and the emergence of “the web of things”. As these trends move though the market, short links are the addresses that connect people, things and machines.

I’m a bit fuzzy on how short links connect people to objects in the world (“the web of things”) — perhaps we’ll be seeing some announcements on that front from Bit.ly in the future.

Bit.ly’s blog post doesn’t include the size of the round. TechCrunch reports that it was $10 million, bringing the company’s total funding to $15 million. (Update: Bit.ly confirmed that the round was “a bit less than $10 million.”). RRE Ventures led the round, while new investor AOL Ventures also participated, along with previous investors O’Reilly AlphaTech Ventures, Mitch Kapor, Founders Fund, SV Angel, Joshua Stylman, Peter Hershberg, David Shen, and Betaworks. 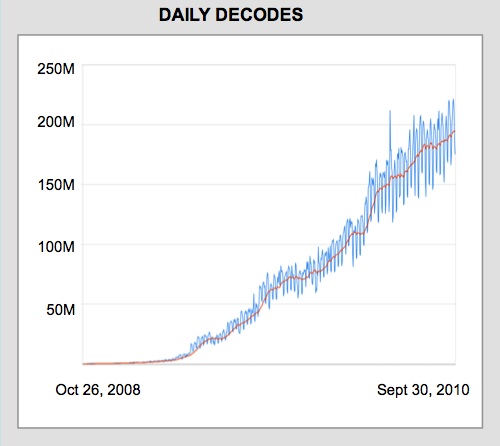