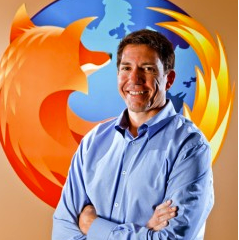 Browser-maker Mozilla still has a tricky relationship with Google, judging from statements made last night by its new chief executive, Gary Kovacs.

Reporters had a chance to ask Kovacs a few questions at the Mozilla open house yesterday, when the company invited us into its Mountain View, Calif. headquarters to preview some of the new features in its Firefox browser. The gathering came just a day after Google held its own press event, where it announced some improvements to its Chrome Web browser, as well as a pilot program for Chrome OS, its netbook operating system that’s built around Chrome.

Kovacs, who was announced as CEO in October and took over just a month ago, said that Mozilla has always aimed to provide an alternative to commercial browsers — and now that includes Chrome. Firefox doesn’t need to privilege any particular website or application, while Google’s Chrome is “tied to their commercial purposes,” he said.

On the other hand, Google has said that it wants to “decouple” Chrome from its other Web services, so that Chrome users aren’t pushed to use Google search, email, and so on.

“If they say it’s decoupled from Google, great,” Kovacs said. But he added, “I don’t believe it.”

Google isn’t deliberately lying, he said. However, the company created Chrome for a business reason, and Kovacs said that purpose is not “to free the world from any connection to Google.” Instead, the search giant wants to use the data gathered by Chrome to create a better, more personalized experience in search and other Google products, he said.

Firefox, on the other hand, has gone out of its way to avoid keeping any information about the user. For example, with the Firefox Sync service (which allows users to access bookmarks, tabs, and passwords on multiple devices) all your data is encrypted on your computer, so that when it gets sent to Firefox’s servers, Mozilla isn’t able to use it at all.

In the coming year, Mozilla will be focusing on giving users more control over how their information is shared on different websites and applications, Kovacs said. This is something the Federal Trade Commission addressed last week, when it said Web browsers should give users an option to block websites from collecting data about their online activity.

Microsoft responded with a “Do Not Track” feature in Internet Explorer. Kovacs said Mozilla is also trying to figure out the best way to implement this idea. “We need to balance a bunch of things,” he said, because it’s important to distinguish between different types of data sharing and to recognize that some kinds of sharing improve the user experience.

On the Google question, Kovacs noted that the relationship is both friendly and competitive — the companies are always either “hugging or hitting” each other. Google was the first company to visit Kovacs when he started at Mozilla, and Google’s search deal in Firefox provides the vast majority of Mozilla’s revenue.

“For Google to win, it doesn’t mean we lose,” Kovacs said.