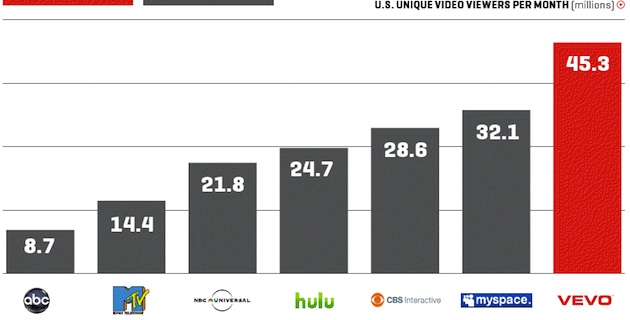 Vevo, the music video site created as a partnership between the record industry and YouTube, just released impressive statistics showing its growth since launching in December 2009. The site says it attracted 62 percent more monthly viewers in the United States than it did at the start.

That statistic comes from the monthly numbers already released by comScore, but Vevo has repackaged the data to show the growth over time, and it fleshed out the details of who exactly is watching.

Here are some highlights from Vevo’s numbers:

Vevo’s initial popularity was probably a given, since it was tapping into YouTube’s massive audience, but the continued growth is a good sign. The data doesn’t answer one of the big questions about Vevo, though: How much money the site is actually making? That question is particularly important, since the site was created as a way to segregate music videos from some of YouTube’s other content, and therefore make more money from advertising. It does seem to be reaching eyeballs that would be valuable to advertisers.