The runaway hit single “Despacito” has pushed past both to become the most viewed clip on YouTube of all time in less than 8 months. YouTube revealed the milestone Friday in a blog post.

“Averaging 14.5 million views per day since upload, the video already owned the record for fastest video to 1.5, 2 and 2.5 billion views, reaching each of those milestones in less than 1/2 of the time of the previous record holders,” the company said in a blog post.

The song by Luis Fonsi with Daddy Yankee hit 2,993,786,682 views, according to YouTube. It overtook “See You Again,” which only held the most-viewed crown for a month.

The song has been insanely popular across just about every platform. According to YouTube, the song has been atop the Billboard 100 chart, and earlier this year it became the most streamed song of all time.

The question now: How far past the 3 billion mark can “Despacito” go? 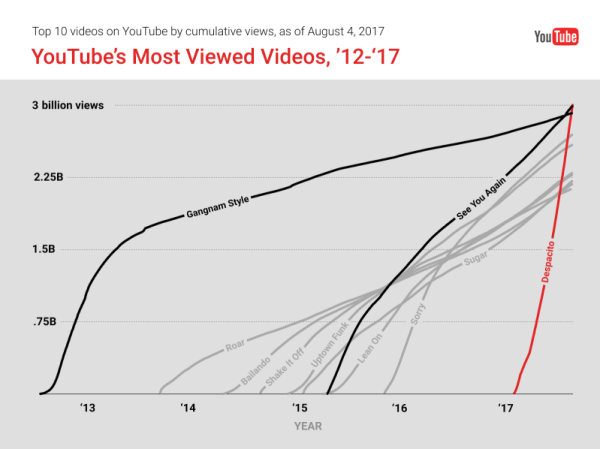 In a statement on the blog post, the duo praised YouTube for its role in helping their song become an international viral sensation.

“Breaking the record for most viewed video of all time on YouTube is truly incredible, not only for me but for Latin music and our culture,” Fonsi said a statement. “Working with a platform like YouTube has allowed our song to reach audiences all over the world, something that just a decade ago was nearly impossible.”

Finally, YouTube noted the success is indicative of a larger wave of Latin music surging on its platform.

“Around the world, monthly view counts for top Latin acts have skyrocketed since this time last year, growing 940 percent in Indonesia, 821 percent in the Philippine, 463 percent in India, 284 percent in South Africa, 260 percent in Israel, 270 percent in New Zealand, 237 percent in Turkey, 178 percent in the U.K. and 110 percent in Canada,” YouTube wrote. “And as further proof of the explosion, Latin artists make up a full 1/3 of the slots on this week’s YouTube Global Tracks Chart.”