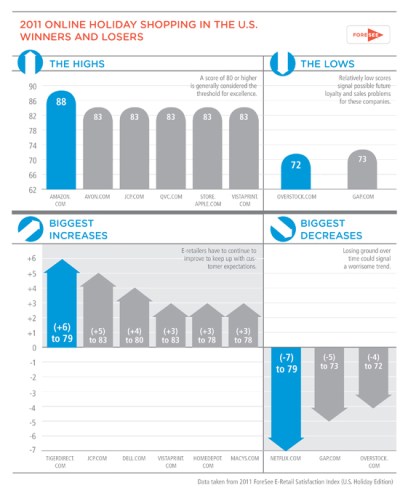 In previous years, Amazon faced competition from movie rental and streaming video service Netflix on the firm’s satisfaction index. This year Amazon scored an 88 (of 100). But with excelling customer support, fast shipping through its Amazon Prime membership and no taxes on items sold by Amazon itself, those results are hardly surprising.

The lower score by Netflix is even less surprising. In July, the video rental company decided to raise subscription rates by 60 percent on its DVD-by-mail service, which caused a huge uproar among its 25 million monthly subscribers. Then in September, CEO Reed Hastings announced that the company was spinning off its DVD-by-mail business into a separate company called Qwikster — a move that caused an even bigger customer backlash. After plenty of negative criticism and a significant dip to its stock price, Netflix decided to cancel its plans for Qwikster.

With that said, it’s no wonder Netflix’s customer satisfaction score plummeted seven points (or eight percent) from last year to 79.
However, what’s interesting is some of the areas where satisfaction dropped. ForeSee said the company dropped in all elements tested for the report, including site content, site functionality and merchandise.

As I’ve previously pointed out, Amazon is slowly making strides into the streaming media subscription market with its Prime Instant Video. With a solid customer satisfaction ranking, Amazon is one step closer to becoming a serious streaming competitor against Netflix.

Joining Netflix’s decreased score are clothing retailer Gap (down six percent to 73) and Overstock.com (down five percent to 72). Click the image to the right for a better visual of the big winners and losers of ForeSee’s 2011 results.