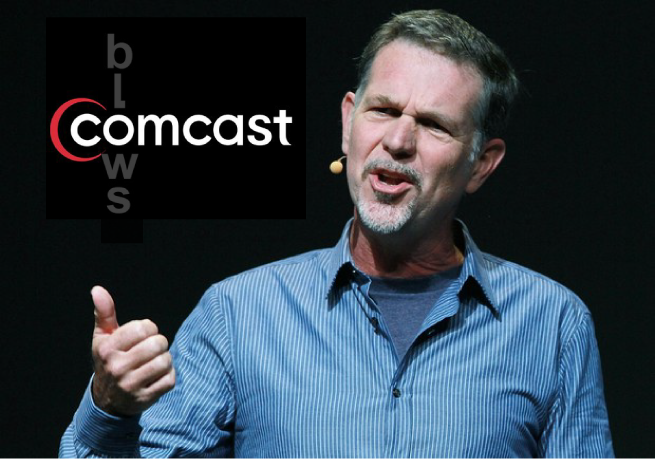 Netflix head honcho Reed Hastings isn’t one to keep quiet when he thinks his company isn’t getting a fair shake against the competition. But unlike most CEOs who use official channels like press releases or company blogs, Hastings doesn’t hesitate to fire off a round of highly critical comments from his personal accounts on social networks.

Case in point, Hastings posted a short rant on Facebook yesterday (his second, in April alone) that accused cable TV and Internet service provide Comcast of no longer following net neutrality principles — the position that there should be no restrictions by Internet service providers or governments on consumers’ access to the web.

Lots of people have raised an eyebrow over Comcast’s Xfinity TV, which is the streaming on demand video component of the cable giant’s TV service. Comcast recently launched an Xbox 360 app that allows people to gain access to this service through the game console, and one of the big selling points was that all data consumed in this way didn’t count against a subscriber’s monthly data cap of 250GB.

Comcast should apply caps equally, or not at all.

For example, if I watch last night’s SNL episode on my Xbox through the Hulu app, it eats up about one gigabyte of my cap, but if I watch that same episode through the Xfinity Xbox app, it doesn’t use up my cap at all.

In what way is this neutral?

Some people responded to Hastings comments by pointing out that Xfinity TV data is sent over the same network Comcast uses for its digital cable TV service, which has previously been called a private network — not over the public internet. This is true, but the Xbox app marks the first time Comcast has allowed access to its private network through a third-party device. It’s a privilege typically reserved for Comcast’s cable boxes. And because Netflix, Hulu, and HBO Go are Xfinity TV competitors that are also available on the Xbox, Comcast has an unfair advantage.

The argument that Comcast’s private network data isn’t the same as internet data goes out the window when you pit the data-cap-less Xfinity TV service against other services. Even Comcast decided to backtrack on the “private network” terminology, after realizing it may end up opening a Pandora’s box of criticisms and possible antitrust suits.

Comcast can easily avoid this by forcing its Xfinity TV Xbox app to run over the internet, the same way people access Xfinity in web browsers and mobile devices. Alternately, it could begin allowing its customers to access competing streaming video services through its leased cable boxes without affecting data caps.  The former option is probably the easiest, but I’m guessing Comcast is going to ignore this situation with the hope that it’ll go away in a few months.

It’s unlikely Hastings and his company will keep quiet about the situation. Netflix recently launched its own political action committee, FlixPAC, to increase its influence in Washington.