Netflix is rolling out a new feature today aimed at visually impaired people, one that describes what’s happening on-screen.

Kicking off initially with Marvel’s new series Daredevil, audio descriptions can be turned on through the same controls that are used to switch subtitles on and off. Based on our tests, it literally describes everything that’s happening on the screen. For example, from the opening credits to Daredevil, it says:

Some letters pop out from a white background, then turn red, Netflix. 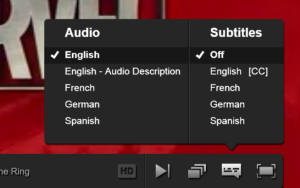 The narration describes everything from physical actions and expressions to settings and changes between scenes.

Though it’s restricted to Marvel’s Daredevil for now, Netflix says it’s adding support for more titles in the coming weeks, including House of Cards, Orange Is the New Black, and Marco Polo.

“Over time, we expect audio description to be available for major Netflix original series, as well as select other shows and movies,” said Tracy Wright, director of content operations at Netflix.

The decision to kick things off with Daredevil isn’t coincidental — the main protagonist in the show is blind, so it seems apt to launch audio descriptions with this series. However, it’s worth noting that this came about thanks in part to lobbying from the Accessible Netflix Project campaign, which is led by a comics fan who is blind.

Given that Netflix already offers subtitles and closed captions for those with hearing impairments, audio description for the visually impaired is a logical and sensible move.