As we near the end of another year, VentureBeat takes a look back at some of the highlights from two companies at the forefront of the cord-cutting movement: Netflix and Amazon.

From awards and big-name content acquisitions to new international markets and strategic partnerships, this is a tale of two global video-streaming giants in 2015. 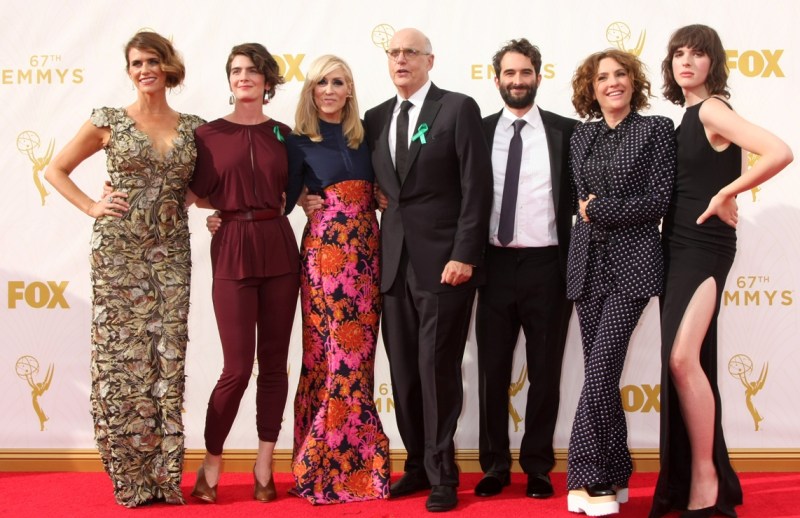 Above: Jeffrey Tambor & the cast Transparent at the 2015 Emmys

If we learned anything in 2015, it’s that original content has well and truly come of age.

Both Amazon and Netflix started the year with a bang by securing gongs at the Golden Globes. Amazon walked away with the top TV comedy award for Transparent — the first online series ever to win a Golden Globe. Jeffrey Tambor also scooped up the award for best comedy actor for the show. Not to be outdone, Kevin Spacey emerged triumphant after seven previous nominations, winning the award for top actor in a drama for Netflix’s House of Cards.

Later in the year, Amazon notched five Emmy awards compared to Netflix’s four, which is notable when you consider that Netflix had a third more nominations than Amazon. To celebrate, Amazon cut the price of its annual Prime membership by a third. But only for 24 hours.

In addition, Netflix could have a serious Oscar contender with Beasts of No Nation, though we’ll need to wait until the new year to find out. This wouldn’t be the company’s first Oscar win, however, as it also won an Academy Award for a documentary short subject last year.

Awards aside, the online video titans invested big in their slate of content. Perhaps most notably, Amazon emerged victorious in the race to sign up former Top Gear presenters Jeremy Clarkson, James May, and Richard Hammond, who will present a new, as-yet-unnamed show for the car-loving fraternity. The move shows how committed online-video giants are to grabbing the rights to big names. Amazon reportedly paid an eye-popping $250 million for the show. Elsewhere, Netflix confirmed it had raised $1 billion in debt to fund its original-programming ambitions.

Both companies racked up a number of other big-name signings. Amazon signed up Woody Allen to create his first-ever TV series and later committed to producing 12 feature films a year to be shown in movie theaters. Part of this plan, the company said, was to narrow the theatrical release window to as little as four weeks, which it can do when it has full control over the content.

Over at Netflix, the company brought Leonardo DiCaprio on board in a multiyear deal to make a new documentary series, while rumors emerged that it was planning to create a new live-action adaptation of the classic Nintendo game, the Legend of Zelda.

Away from the hullaballoo of big-money content acquisitions, the surest sign yet that unique programming is emerging as the key differentiator came when Netflix revealed it would not renew its agreement with the cable network Epix, meaning subscribers would lose access to high-profile movies such as Hunger Games, World War Z, and Transformers. Why? Netflix explained:

While many of these movies are popular, they are also widely available on cable and other subscription platforms at the same time as they are on Netflix and subject to the same drawn-out licensing periods.

While Netflix is still reliant on third-party content for the most part, it’s distancing itself from many of the titles that can easily be watched elsewhere. It primarily wants content it can dangle in front of people and say, “Hey, lookie what we got here.” 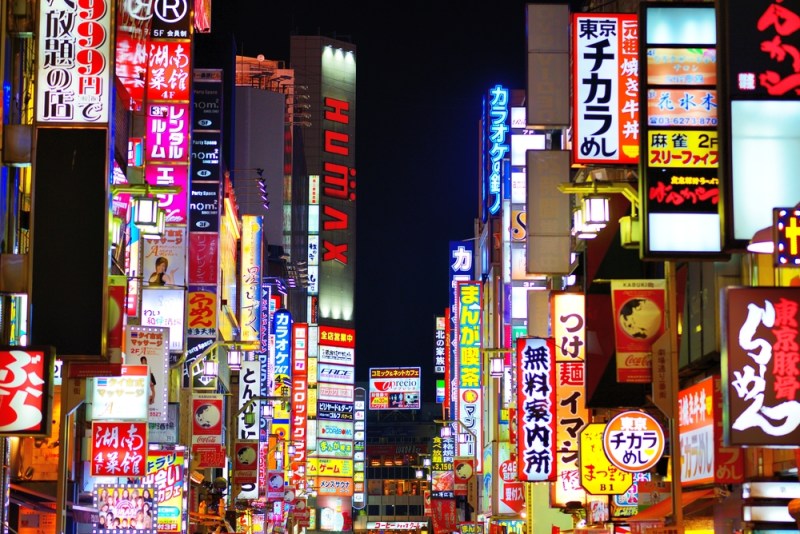 Above: Tokyo, Japan, where both Amazon & Netflix are now available

At the start of 2015, Netflix was available in more than 50 markets around the world, while Amazon’s Prime Video was only open in four: the U.S., the U.K., Germany, and Austria.

With trading restrictions easing between the U.S. and Cuba, Netflix seized this opportunity by launching in the tiny Caribbean nation, though it was largely a symbolic gesture given that high-speed Internet is something of a rarity in the country. However, Netflix did announce a number of other big market launches this year. It arrived in New Zealand and Australia in March; Japan in September; Italy, Spain, and Portugal in October; and revealed that Hong Kong, Singapore, Taiwan, and South Korea would be added in early 2016.

One question Netflix has faced over the years is: Will it ever offer offline access to its content? Netflix has never skirted the question and has always maintained that downloads aren’t on its roadmap. The issue reared its head again this year, when Amazon announced it was to let Prime subscribers download some TV shows and movies on its mobile apps. Once again, Netflix said it has zero intentions to introduce offline mode.

Some notable partnerships came to light in 2015 to help expand the availability of both video-streaming services. Netflix signed up Marriott hotels to include its app on their in-room televisions, while Amazon inked a deal with JetBlue to let travelers watch videos without paying for Wi-Fi. Not to be outdone, Netflix partnered with Virgin America to include its service on U.S. flights.

Elsewhere, Amazon ironed out a curious little quirk with Android this year. Until fairly recently, Amazon didn’t offer a streaming app to Android users. When it finally did launch one in late 2014, the process of accessing it was a mess. You had to find and download the Amazon Appstore to your Android device, install the Amazon Video Player, and search for videos directly within the main Amazon shopping app, which was linked to the video player.

Things improved this year when Amazon finally launched a standalone video-streaming app for Android. It’s pretty slick, but you can’t download the app easily. You still have to go through the same convoluted process as before. It’s nuts — and certainly too much friction for many non-techie people.

Netflix has stated its intent to be a truly global service — that is, in 200-ish markets — by the end of 2016. To achieve such scale, its own stack of original content will help, but it also needs to remove the friction from global licensing deals. Netflix’s chief content officer Ted Sandros has previously discussed the company’s efforts to buy the rights for shows in multiple regions at once, but it’s not an easy process because of the way the networks and studios have set themselves up internationally.

“I don’t know if it is more difficult than expected but it has not been as easy road,” explained Sarandos during a recent investors’ call. “All of the studios and networks have situated themselves to be regional sellers. They have never been global sellers and it makes complete sense that Sony and Disney and Warner Brothers would have regional sales teams. Now we are global buyers and buying global rights to shows and movies, and there is some resistance to it, mostly from the regional sellers, people who are in charge of regional selling, who don’t want their jobs marginalized.”

In short, Netflix wants to expedite the rights-buying process to serve its growing global user base, but regional rights-holders are impeding this.

“If you stand still, you stagnate” is a common philosophy in technology as companies iterate and improve their products to meet the latest standards and preferences. With that in mind, both Netflix and Amazon rolled out a slew of notable updates in 2015.

Back in April, Netflix introduced a new narration feature that describes what’s happening on screen for the visually impaired. This was followed in June by the platform’s first major website update in four years, which saw an all-new design rolled out to make searching easier.

Over at Amazon, the Internet giant revealed back in April that HDR-quality streams would arrive on Prime videos this year. True to its word, two months later it launched HDR for a series (Mozart in the Jungle) in the U.S. For the uninitiated, HDR improves the contrast of a video, making shadows and highlights more distinctive — blacks appear blacker, and whites appear whiter. But if you don’t have a HDR TV, well, it will be lost on you.

Perhaps the most exciting Amazon Video launch of the year, from a feature-update perspective, was when it brought its “X-Ray for Movies and TV” service to the big screen for the first time.

In a nutshell, X-Ray for Movies and TV taps IMDb (the Internet Movie Database) data to deliver contextual information about what’s currently happening on-screen. Want to know who that familiar face was who made a brief cameo and what other movies you’ve seen them in? This is what X-Ray is all about.

X-Ray first arrived for Kindle Fire in 2012, but it’s now available on Amazon Fire TV and Fire TV Stick too, meaning you now have this very cool little tool in your living room.

Who are these actors? Ask X-Ray, an Amazon Video feature.

Netflix also put a focus on the big-screen experience this year. In January, the company launched the Netflix Recommended TV program, which serves up an independent evaluation of the best smart TVs for streaming Netflix. Three months later, Netflix revealed a triumvirate of televisions it reckons are great for Netflix.

Though Amazon and Netflix are competitors, the two companies — alongside Cisco, Google, Intel, Microsoft, and Mozilla — joined forces to create the Alliance for Open Media. The open source project aims to deliver a next-generation video codec by 2017.

In October, Netflix revealed it was upping its lower-tier subscription from $9 a month to $10 a month in the Americas, but only for new users. Existing users will continue on their current price plan until October 2016.

While Amazon’s reputation as an employer took a severe bashing in 2015, Netflix won major plaudits for its new maternity and paternity leave policies, which essentially promised new parents unlimited paid leave for the full first year after a child’s birth.

Elsewhere, in an interesting move, Amazon banned sales of Apple TV and Google’s Chromecast streaming devices. While they directly compete with Amazon’s own Fire TV stick and box, Amazon claims its main gripe is that Apple and Google devices don’t play friendly with Amazon Video. An eye for an eye, and all that.

Though there are pros and cons to both Netflix and Amazon Video, an exciting rumor started circling in late November that Amazon was lining up a major upgrade to its video offering. In short, Amazon was planning to offer third-party on-demand video services as part of Prime. Details were recently confirmed, and dozens of video-on-demand (VoD) partners have been brought on board, including Showtime and Starz. It’s a smart move by Amazon: By centralizing a number of VoD subscriptions through a single Amazon account, this makes it easier for consumers to monitor and manage their various subscriptions. Amazon is also integrating the various services, meaning users can search for content or create a single watchlist across all their subscriptions.

People often talk in terms of “winners” and “losers” when comparing products and companies. But it has become increasingly clear, in the video-streaming realm at least, that it’s not a case of one or the other. There’s every reason to suggest that consumers will be willing to pay for both Netflix and Amazon Prime — not to mention other services such as HBO Now, which launched in the U.S. this year.

What viewers want is real differentiators. And with a growing slate of original programming, both Amazon and Netflix are setting themselves up well to service the cord-cutting generation.