“I am now knowing the smell of the dead. They are sweet like sugarcane and rotten like plum wine. And when they stay in the sun, they are growing plump.”

These are words spoken by Agu, the skinny child soldier at the center of “Beasts of No Nation,” the first original feature film released by Netflix. Agu is played by the powerfully talented Abraham Attah, a first-time actor whose performance deserves an Oscar nomination. His performance is unquestionable; the only question is whether the Oscars will recognize Netflix during awards season.

Netflix made a sly choice for their debut film: a hyper-real depiction of a country (ahem, film industry) ripped to shreds by ineffective governance and infighting. At the forefront is the truly fearsome Commandant, played Idris Elba, a psychopathic warlord who employs an army of child soldiers. Indeed, after winning a few dozen Emmys and Golden Globes for shows like “Orange is the New Black” and “House of Cards,” it’s only logical that Netflix set their sights on the Oscars race. Netflix is no stranger to successful documentaries, but Cary Joji Fukunaga’s incredible film might be the company’s ticket to realm of narrative features. They put a gun to the neck of Blockbuster and HBO, now Netflix wants to take Hollywood by storm. Thankfully, the only child soldiers they need are fictional. 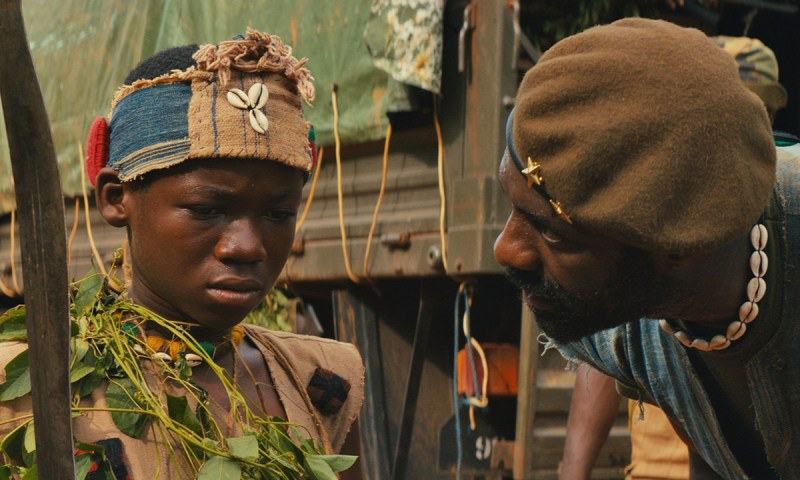 The film isn’t for the faint of heart. Based on Nigerian author Uzodinma Iweala’s 2005 novel of the same name, the film follows Agu’s transition from an innocent kid with a toothy grin to a seasoned, skilled killer. The film’s first 20 minutes show us Agu’s relatively happy childhood. There is a war going on, but he lives in the buffer zone. The war, at first, is rarely more than distant sounds and smoke billowing from the hillside.

But, suddenly, Agu is ripped from his family to join the ranks. As director Cary Joji Fukunaga takes us further into the fray, there is nothing to be learned. We don’t know the country, the players, or the implications. The Commandant manipulates Agu’s young mind but their bond isn’t elevated or particularly meaningful. It’s just a random military man recruiting a random innocent boy to fight a random civil war in a random African nation that, for all we know, commenced at random. All sides seem equally bloodthirsty, partisan, and armed to the teeth. We aren’t pointed to a moral center. We see no beginning and certainly no end — just death, and Agu tells us what it smells like.

“Beasts” makes surpassingly beautiful cinema using real-world brutality that American audiences are used to ignoring. This is less “Hotel Rwanda” and more “City of God,” and it’s a harrowing ordeal start to finish. The film’s nonstop, brutal realism could easily be ignored, but thanks to Netflix, it won’t languish in art-house theaters or on the tongues of movie buffs with insufferable opinions. Instead, it’s front-page news on the television screens of some 69 million subscribers. Despite its tiny budget and unorthodox release, it’s a massive movie with massive Oscar potential. The only thing stopping “Beasts” from sweeping the Academy is the Academy itself. 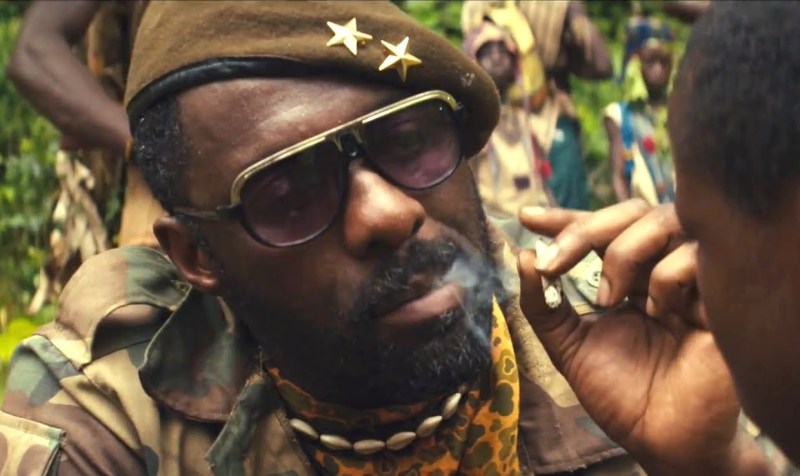 If Oscar voters are brave enough to see past their antiquated, overly-white political squabbles, they’d recognize that “Beasts” is a clear contender for best picture, actor, director, sound design, adapted screenplay and cinematography. But that could be tough for the historically stodgy institution. “Beasts” circumvented the traditional film distribution model, carries no MPAA rating, and doesn’t feature the white male lead character that Hollywood so often relies on. These all sound like good things (because they are), but don’t count on a bunch of old, white men to lead the way.

In spite of the boycott from major theater chains, “Beasts of No Nation” deserves to be see on a big screen. Fukunaga is at his best when he follows a character into a dangerous, dark environment — you might remember his masterful single-shot, no-cut chaos during the apex of “True Detective” Season 1. A similar sequence unfolds here, but it feels just as raw, inventive and technically impressive.

No matter what happens at the Oscars, the term “made for TV movie” is no longer pejorative. You should absolutely watch this movie, and you should absolutely watch it in a theater. Without geopolitical specifics, Fukunaga has distilled the horrific entirety of modern civil war into the naive experiences of one young boy. Attah’s show-stealing performance as Agu will be best appreciated in a theater. It’s all quite overwhelming, so allow yourself to be overwhelmed.

Use your couch for “The Office” reruns and head to the theater for “Beasts.” The theater chains might decide to wise up, but Netflix has just proved that it doesn’t need them.