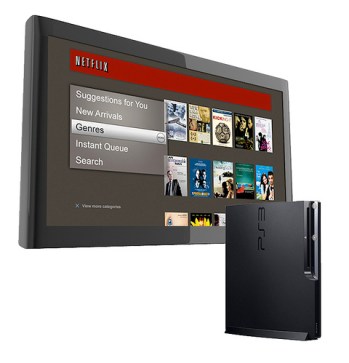 The battle for the best Netflix experience in your living room rages on. Sony announced today that Playstation 3 owners will no longer need to use a disc to access Netflix’s streaming service starting October 18, and the console’s Netflix experience will also be improved with a slew of exclusive new features.

PS3 owners (and Wii owners) have been forced to use a disc to watch Netflix’s streaming content since they received the service in late 2009. In comparison, Microsoft has offered Netflix built-in to its Xbox 360 console since July 2008 — making it more convenient for users, since they never have to go searching for a disc. Now the PS3 will be able to offer the same level of convenience.

More interesting than the disc-free announcement, Sony also revealed that the PS3’s new Netflix app will be able to display 1080i 1080p (Sony updated to say it will support 1080p) high-definition video and Dolby 5.1 surround sound. The Xbox 360 and other Netflix streaming solutions for the living room currently only offer 720p high-definition video. And nothing at the moment offers surround sound for Netflix’s streaming video.

There’s no telling how long the features will remain exclusive to the PS3, but the promise of better video and audio quality is enough to make the PS3 my primary Netflix box for the near future. Eventually, both features will make it to other Netflix streaming devices.

The new PS3 Netflix app also brings with it a new user interface, faster video startup, as well as the ability to search for streaming content. As always, you’ll have to subscribe to Netflix’s $8.99 single disc plan at the bare minimum to gain access to streaming content.

Catch a glimpse of the new PS3 Netflix app below:
http://www.viddler.com/simple_on_site/526631bd