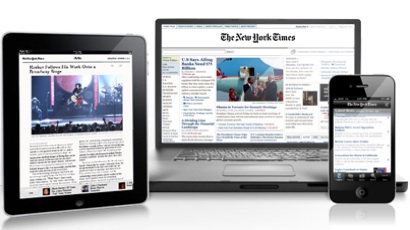 After announcing its new digital subscription plan a couple of weeks ago and launching the plan in Canada, The New York Times is now expanding its paywall to readers everywhere. The strategy is very device focused (you have to purchase a mobile or tablet app; you can’t buy website access on its own), but there’s one class of device that’s curiously absent — e-readers like Amazon.com’s Kindle and Barnes & Noble’s Nook.

The only mention of e-readers on The Times’ new digital subscription page is in a footnote pointing out that they are not included in the new plans. However, you can already buy subscriptions to The Times on the Kindle and the Nook for $19.99 per month. And Amazon announced today that Kindle subscribers will get free access to NYTimes.com on their computers, just like the new mobile and tablet subscribers.

So why were e-readers reduced to a footnote in The Times’ digital efforts? I suspect it’s because monetization on the Kindle and Nook were already working just fine, so Times executives focused their efforts on finding new strategies. Now, almost as an afterthought, The Times is returning its attention to the paying readers it already has, so Kindle subscribers are getting website access just like print subscribers. (There’s no official word on whether Nook subscribers will get the same privileges, although I’d be pretty surprised if they don’t.)

In his write-up of the Kindle news, Wired’s John C. Abell expressed reservations about “the commoditization of the [Times’] website.” I don’t know if that’s a valid complaint about Kindle subscribers — who are paying customers, after all — but there are still questions about whether The Times’ paywall lets too many readers in. As The Times has already announced (confusingly), readers get 20 free articles per month, but links from social networks and other sites will always work, even if you’ve passed your quota.