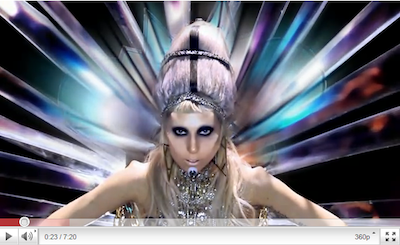 There’s a reason Lady Gaga recently visited Google and snubbed Facebook. The music industry is on the precipice of another huge transition from downloads to streaming, and Google has the opportunity to own this transition. It can circumvent both Facebook’s growth as a media channel and Apple’s forthcoming streaming service.

There was a time when Myspace was people’s first stop after hearing about a new band. They would immediately go to the band’s Myspace page, where they could listen to tracks, see what people were commenting, and read what the artists were posting themselves.

Now people are going to YouTube first. As the Rebecca Black “Friday” video showed, YouTube is the hands down best platform for media to go viral. YouTube is definitely right up the artists’ alley. Artists can add a fun background image on the channel, see how many video views you have, post a message to their fans, and also check out what all the comment trolls are up to. A YouTube “Like” is the ultimate +1. YouTube is even music label-friendly, with its fast-growing Vevo subsidiary (which is co-owned by music labels), as it provides a monetization avenue for music streaming.

Facebook is definitely hot and there are a lot of people there. On the other hand, the interface is not artist friendly, the apps are hard to deploy, and it’s just not fun anymore. It’s a utility – “Yes, mom, I am going to Lior’s bar mitzvah”. And what gets the most traction on an artists’ Facebook page? Posting a YouTube video. Although Facebook and Twitter now allow posters to attach media, there is an inclination to use those viral channels only to drive traffic to a YouTube video. Then you don’t have to deal with uploading a video multiple times and you know it will work on mobile devices, since they all support YouTube. And I am writing this as someone who has run numerous Facebook campaigns for A-list artists like Lady Gaga and Black Eyed Peas.

Although there aren’t specific statistics, I think that a significant portion of Facebook’s time-on-site is people watching posted YouTube videos. Facebook used to not allow embedded YouTube videos from going fullscreen, but recently had to allow this feature since people would double click the video, go to YouTube, and likely not come back.

YouTube has made some big moves lately, buying Next New Networks to help the next generation of YouTube stars make content, taking on Netflix by announcing that it will organize itself into channels and spend $100 million on original content, and buying the rights management technology behind Netflix.

As I posted last December and is now rumored, Myspace — declining as it is — is still a tremendous property for Google to acquire. It has a lot of uniques, every media property has a presence there, and has a perspective on what people like (aka their “interest graph”) that can heavily influence drive YouTube recommendations. Even simply redirecting all the traffic from pages Lady Gaga’s Myspace page to Lady Gaga’s YouTube page would give YouTube a huge boost as a media channel.

With the new Google reorganization, YouTube is now functioning as an independent unit. It’s time to make some aggressive moves. Yes, everyone is watching Google’s every “Desperately Seeking Social” moves, and buying Myspace as a social strategy could blow up in their faces. But buying Myspace at a significant discount to grease YouTube’s growth makes a whole lot of sense.

Peter Yared is the vice president of apps at Webtrends, which acquired Transpond, a social-apps developer he founded. You can follow him on Twitter.