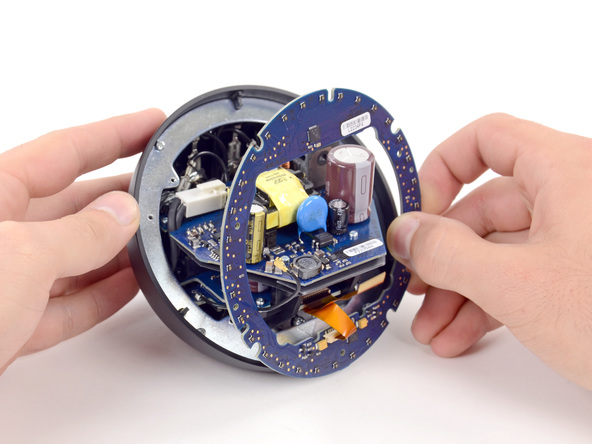 We’re still not sure what Google hopes to accomplish with its $300 Nexus Q media streamer (I suspect even Google isn’t sure), but that’s not stopping the folks at iFixit from ripping Google’s  bowling ball apart.

But if you were looking for some big revelation from the Q’s innards, you’ll probably be disappointed. Aside from the unique circular shape for many of its components, there’s not much to surprise even the nerdiest gadget geeks.

iFixit ranked the streamer with a repairability score of 8 out of 10, which means it’s fairly easy to fix. Though if you find yourself purchasing a Nexus Q, you should probably be more worried about your terrible buying decision than the device breaking. (Venturebeat’s Tom Cheredar and Jolie O’Dell both explained in depth why the Nexus Q isn’t worth your time.)

The repair gurus were able to open up the Nexus Q without any tools, and internal components are easy to replace, since they aren’t soldered in place. iFixit warns that the Q’s power supply is exposed once you start digging into the device, so that’s something to watch out for.

Google has made a huge deal about the Nexus Q being designed and manufactured domestically, and iFixit’s teardown didn’t disprove those claims. Of course, the company couldn’t avoid using some overseas components, including the RAM, flash memory, and USB/Ethernet controller. But Google never promised that every element of the Nexus Q was born and bred in the USA.