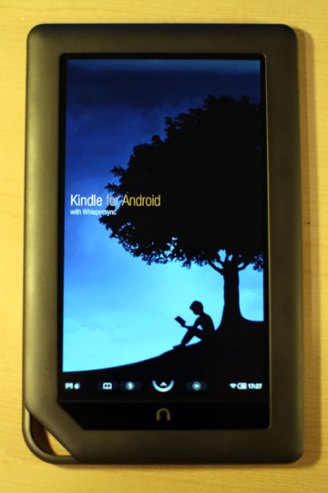 Leave it up to hackers to unlock the full potential of Barnes and Noble’s Nook Color, a device that is effectively an Android tablet currently trapped in e-reader clothing.

The hacking process involves “rooting” your Nook Color, which lets you modify the device’s software, as detailed by the site Blog Kindle.

Several minutes of work can grant you access to the Android market and a wealth of apps on the Nook Color, including Amazon’s Kindle app. If successful, you can effectively turn the $250 Nook Color into an Android tablet almost on par with Samsung’s Galaxy Tab, which retails for over $400 (and usually with a monthly cellular contract).

For Windows users, the rooting tool is a simple application that does most of the work for you. Mac and Linux users will have to break out their command line terminals to get the job done. Hardware-wise, you only need a microSD memory card (larger than 128MB) and a dedicated card reader for your computer (many laptops have these built-in).

After successfully rooting your Nook Color you’ll have access to the Android Market, as well as some apps like YouTube and Gmail, in the device’s “Extras” folder. As with any hacking method, there’s always the risk that you can permanently damage your device in the process. Additionally, it’s unknown how this hack will affect the Nook Color’s ability to receive updates from Barnes and Noble. But given the end result, the hack certainly seems worth the risk.

Blog Kindle reports that not every Android app works perfectly. The Kobo ebook reader app, for example, doesn’t seem to load its book library properly. But imperfection is a given with any hack, and we can expect these issues to be fixed over time as the hacking tools improve.

We recently reported that Barnes and Noble may be preparing for a major Nook Color update that will bring with it some more Android tablet functionality, but the company has been quick to point out that it doesn’t ever plan to grant full access to the Android Market.