TV Guide Digital has a message for online entertainment guides calling themselves the next TV Guide:

“There is only one TV Guide, and that’s TV Guide,” says Christy Tanner, the executive vice president and general manager of TV Guide Digital.

Tanner reached out to VentureBeat after we published the story “Fav.Tv ain’t your grandmother’s TV Guide.” We received pitches from about a dozen other companies saying they’re the next TV guide, as well. Tanner says there’s been a rash of startups creating business models around features similar to those TV Guide has had in place for the past year. She isn’t saying those other companies are copying TV Guide’s features. Tanner adds the other companies are not thinking as broadly or iterating features as quickly TV Guide can.

It may come as a surprise, but TV Guide Digital has a team of more than 20 developers and engineers. Tanner says this team has produced the very innovations on which some startups base their entire business model. Since last October, TV Guide Digital has released at least one new product or feature every month. The group is constantly cranking out new ways for viewers to interact with and find the shows they love. On top of speed, they also benefit from have a huge built-in audience.

“We have mass market reach and broad acceptance,” Tanner explains. “Our customers and advertisers have embraced every innovation we’ve put out there. People are hungry for innovation and our plan is to keep leveraging our experience. It’s hard for people living and breathing inside the tech community to consider the idea that TV Guide is doing fresh things with technology.”

Take, for example, TV Guide’s Watchlist, an interactive program guide. People can create a list of the shows, sports teams, actors or themes they like to watch on television and Watchlist creates a list of recommended times, channels, websites and services that line up with the user’s tastes. The list is composed of live television events, content only available online and content available on demand. It even covers Hulu, Hulu+ and Netflix (Quickster and whatever movie rental platform Blockbuster releases this fall will be added as soon as they are available).

Tanner gave VentureBeat some exclusive statistics on Watchlist to illustrate her point: Watchlist has had more than 375,000 list creations since its launch. On Monday, September 19, Watchlist had a record 40,000 check-ins. That’s a jump from the 20,000 average daily check-ins it received in May 2011. She added that Monday’s Two and Half Men episode is officially the most checked-in single event, surpassing the Super Bowl.

Innovation is one factor of TV Guide’s success, but monitization is another. TV Guide has sold 50 socially-integrated sponsorships on the Watchlist platform since October 2010. They provide custom ad packages around the concepts of check-ins and “watch and share.” The TV Guide Mobile app has had five million installations over the past year and 1.5 million monthly active users.

Those numbers are food for thought for people who say their startup is “the next TV Guide.”

“If we didn’t evolve, then shame on us. The opportunity here is huge,” says Tanner. “The entertainment industry is constantly changing.”

Make room for the competition

Consulting group Altman Vilandrie & Company found half of 18- to 34-year-olds say they would prefer an alternate program guide, such as a screen with apps or images of available content, to a traditional, static TV guide. There’s clearly a big pie here, and startups are trying to get a slice. 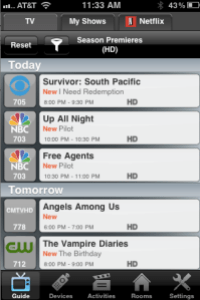 Some smart companies are going about it very differently than TV Guide, including Dijit.com. The company’s free mobile iOS app creates a second screen experience for TV managing and viewing, combining a universal remote, interactive TV listings, social networking and Netflix streaming. Dijit has deconstructed the elements of how people multitask while watching TV (an estimated 70 percent of TV viewers watch while holding another device) to find out which features belong in their app and features that don’t belong at all.

Toeman describes TV Guide’s lack of domination in the second screen category as “a classic innovators dilemma.” The print version of TV Guide was an innovation. It was available in every corner store for $.99. It wasn’t until the app market emerged and a constantly updated programming app for  $.99 became a better deal than a stale print copy.

“I understand how they got into that situation,” says Toeman. “They are starting to make some inroads and I want to see what they’re doing. If they do a great job at something I hope we can do a great job at other things. We think TV is in the 1.5 stage and 2.0 is on the horizon.”

Dijit is making its own, including turning smartphones into universal remotes. It’s also focusing on iPads with a new version of its remote, expected to ship next month. Toeman is really studying the tablet experience because he believes it will dominate the way people experience media at home in their living rooms.