SANTA CLARA, Calif. — It’s a sad paradox that we mostly browse through video clips by means of still images. Whether you’re on YouTube, Vimeo, or another video site, most of what you see are stills — at least, until you click on something.

Gnzo has an alternative: What if you could see up to 30 live videos at once, simultaneously?

Gnzo is essentially a new, more animated way of displaying and browsing videos, and it’s optimized for touchscreens. Instead of square stills, it displays a mosaic of animated videos, each one a 6-second clip from the video behind it.

You can browse through the interface by swiping left and right, or you can zoom in on a specific video by circling it with your finger. At least, that’s how it works in Gnzo’s obviously mocked-up demonstration video below.

The company, which is based in Kanagawa, Japan, and which was formerly known as Gunzoo, showed off its technology today onstage at DEMO Fall 2012. 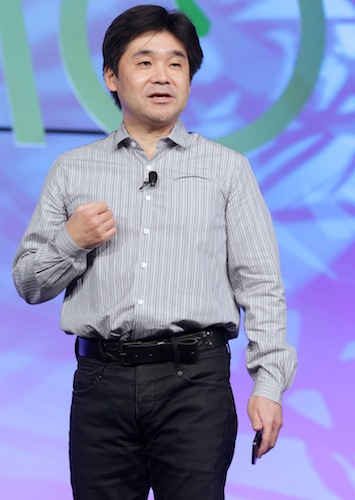 It’s not just a U.I. tweak, however. The company’s “proprietary multivideo compression and streaming technology is what makes the multiple-video playback possible,” according to Gnzo consultant Yuichiro “Woody” Deguchi.

While explaining his company to the audience at DEMO, Shino drew analogies with not one, not two, but three of the major social media channels. He said Gnzo’s goal is to make browsing videos as immediate and accessible as browsing photos is on Instagram, with the ability to see lots of visual content at once like Pinterest, and the immediacy of Twitter.

The challenge for this young company will be finding partners to deliver its elegant U.I. Perhaps it will attract the attention of Google (YouTube’s parent) as an alternative to YouTube’s current, quite horrible interface.

Gnzo has raised $1.5 million to date and is actively seeking its next round of capital.

Gnzo is one of more than 75 companies chosen by VentureBeat to launch at the DEMO Fall 2012 event taking place this week in Silicon Valley. After we make our selections, the chosen companies pay a fee to present. Our coverage of them remains objective.