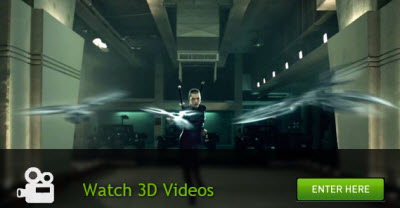 When using the latest version of the Mozilla Firefox web browser, users with Nvidia’s 3D glasses can view videos and photos in the 3D section of Google’s YouTube service, which allows users to upload their own 3D content.

YouTube is adding support for HTML5 and WebM standards to the thousands of 3D videos available on its service. That will allow the Nvidia 3D Vision users to see in 3D, said Jonathan Huang, 3D product manager at YouTube.

Nvidia said it hopes the YouTube content will turn users on to 3D, which has had mixed reviews so far. Eventually, Nvidia wants 3D to become pervasive across homes. That’s slowly beginning to happen as consumers buy 3D TVs, monitors, glasses and other gear.

Users who have 3D camcorders from JVC or Sony can upload their videos directly into the 3D section on YouTube or on Nvidia’s own 3DVisionLive.com site. It’s not going to be an easy sell to get stereoscopic 3D into everyone’s living room, but this is a start. Research marketer Jon Peddie Research estimates that 3D PC sales will grow from 1 million in 2011 to 40 million by 2015.

Phil Eisler, general manager of 3D Vision at Nvidia, said that 93 percent of Nvidia’s GeForce consumers are aware of 3D Vision and 61 percent plan to include it in their next purchase. The 3D glasses retail kits now cost $149.