REDWOOD CITY, Calif. — When the Seattle Seahawks and New England Patriots kick off the NFL’s championship game Sunday, friends, family, and coworkers will gather across the country and the world to watch. But for one big group, while the game will be real, the gathering will be entirely virtual.

The Oculus, of course, is the company that makes the immersive virtual reality (VR) headset. Palmer Luckey founded it, and Facebook subsequently acquired last March for $2 billion.

Now, with developers building all manner of VR experiences for the platform, we’re seeing the technology’s possibilities. Among them? The same kind of Super Bowl shindig everyone else is having — complete with serious fans huddled close to the TV, others standing back and chatting with friends, and some wandering back and forth as the game progresses. But with Oculus, the partygoers will gather physically from all corners of the globe yet be together in one big modern room.

All that’s missing is the guacamole and cheese dip.

That’s the vision of AltspaceVR, the Google Ventures- and Tencent-backed startup based in this Silicon Valley town 27 miles south of San Francisco. The 15-person company has raised $5.5 million to enable VR experiences of all kinds. And this Sunday, the company hosts what it thinks may well be the first-ever Oculus Super Bowl party.

“We’re not so worried about the place where people are watching the Super Bowl,” Altspace CEO Eric Romo told me. “It’s about … we want to watch the Super Bowl together, so great, we’re there together.”

Yesterday, I drove down to AltspaceVR’s offices for a demo. I wasn’t able to see the Super Bowl party in action — even Oculus, unfortunately, can’t bend time — but Romo walked me through how it’ll work. I’ll admit: I was skeptical going in. Now? I’m a convert. This is the gathering space of our virtual reality future. As Edward Miller, the head of visual content for the VR news platform Immersivly, put it, this could well be “the beginning of [the] social sports broadcast.”

Strapping on an Oculus headset and some headphones, I was no longer in a cramped Altspace conference room. I was in a vast, high-ceilinged modern masterpiece of a parlor. With a futuristic cityscape out the window and a fireplace crackling off to the side, the room hosted a huge TV and a massive circular seating area around it, complete with comfy-looking cushions. Come Sunday, this is where dozens of people will come to watch the Seahawks and Patriots duke it out to be the NFL’s top dog.

Many, to be sure, will be there for the commercials, just like at every other Super Bowl party.

At Altspace’s party, the game will be on that huge central TV. Stand close and the audio will be louder, like it would be in real life. Stand far away, or upstairs on one of the giant space’s balconies? The sound will be distant and muffled. The game will come from NBC’s free web stream and be piped onto the giant TV in the center of the room. But the playback will be synced so that everyone sees and hears everything at the same time. If there’s a great play, all in virtual attendance will see it happen simultaneously, allowing fans to cheer or groan together, depending on their team alliances.

If you watched the Super Bowl in the lobby of a hotel, you might be able to barely hear what someone on the other side of the room was saying, but if someone standing right next to you was speaking, you’d hear them loud and clear. That’s how it works in Altspace’s world, too.

Plus, it’s directional: if someone’s telling a joke on your left side, you’ll hear them mostly in your left ear. If you move, the sound will change where it’s coming from to reflect where you went.

And if you’re bored, and wander away from everyone else, you won’t hear them, or the game, at all. Maybe you’ll just stand at the window and gaze down, way down, at the clouds amid the massive futuristic skyscrapers.

Altspace’s Oculus experience is built to bring people together around web-based content. That makes a lot of sense, since so much of what we consume these days can be found right in our browser. In this case, people will gather to watch the Super Bowl, but anyone using Altspace’s technology has at their disposal their own browser, on which they can look privately at more or less anything on the Web.

The company has programmed the browser with a home screen, on which you have a number of default choices: YouTube, Twitter, Hulu, and others. Altspace wants its users to share what they’re doing in real-time, so there’s a Twitter feed where you can see what others are saying about being in this virtual world. 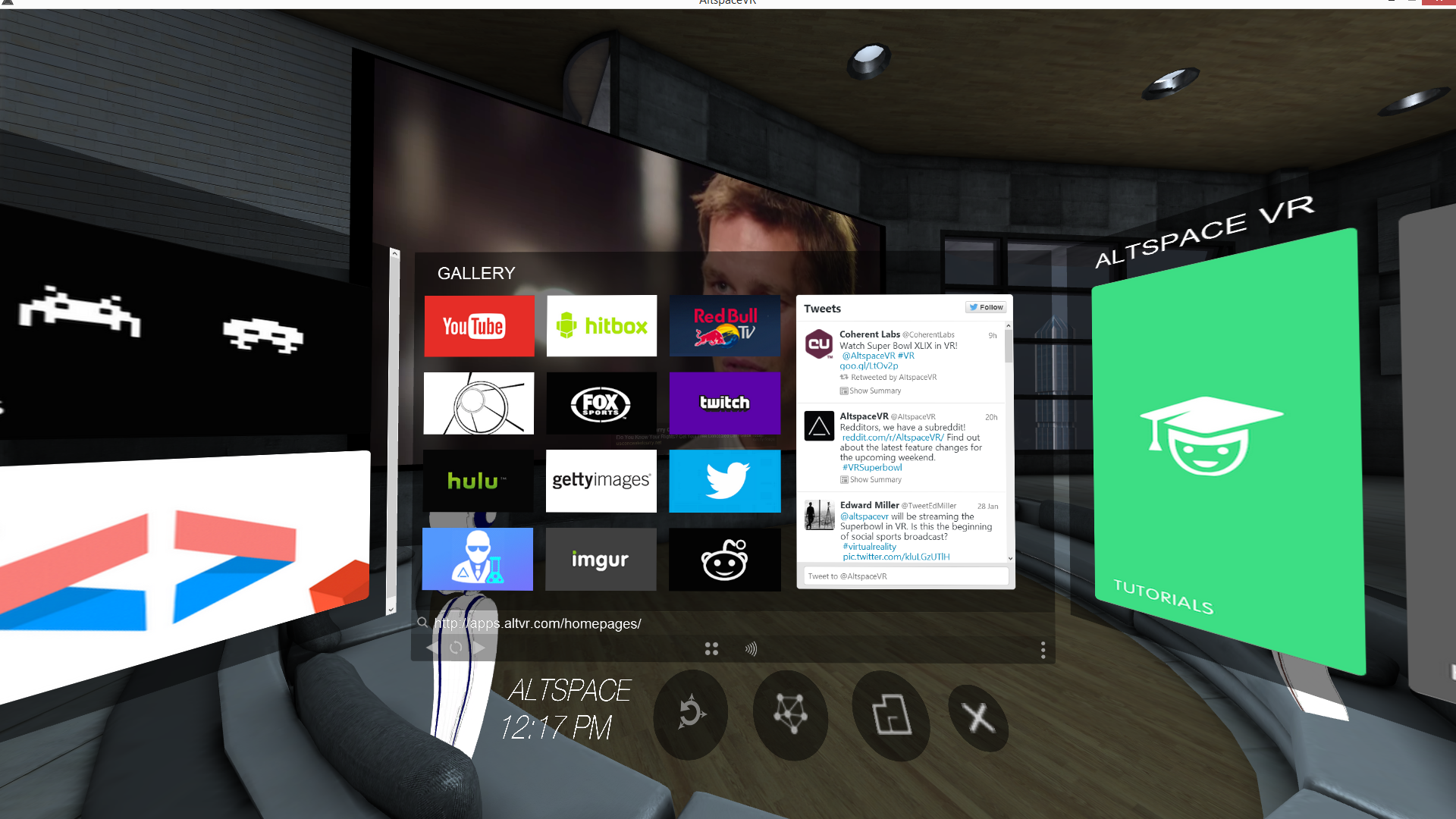 Above: Each user in Altspace has access to their own personal browser.

What Altspace really wants is people from all walks of life to use its technology for just about any kind of gathering. It could be a corporate meeting, or a sponsored movie viewing. Altspace hasn’t worked out its business model yet, but it’s easy to imagine companies paying Altspace to use its technology, and then inviting just the people they want to show up. As Romo put it, “We don’t want to be the content providers. We don’t want to be the organizers. … We know that this platform will only be as useful as the content that’s on it.”

Tech has some limits

The company’s tech does have some limits. Because of the demands of processing all the audio and users’ voices, Altspace can generally handle only a few dozen people in a single space. Romo said he hopes for the Super Bowl, they’ll be able to get 75 together seamlessly. That means they’ll be running numerous instances of the Super Bowl party to accommodate everyone who wants in. Today, there’s 2,000 people on Altspace’s waiting list, but this weekend, it’s opening its doors to everyone.

And come Sunday, you can take part in the Super Bowl party, even if you don’t have a VR headset. Altspace has made it possible to tune in via a normal browser. And while you won’t have the same immersive experience as you would if you have Oculus, you can see (and hear) what’s going on.

Still, Romo, who was SpaceX’s 13th employee, said Altspace has focused on optimizing the Oculus experience so that it works just as well on a good laptop as it would on a hardcore gaming PC. “If it’s a communications medium that lots of people want to use,” he said, “we have to make it work on hardware they already have.”