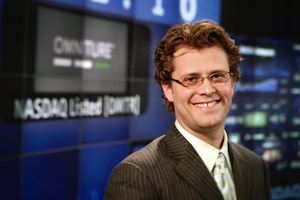 Adobe announced today that Josh James, chief executive of its acquisition Omniture, is leaving at the end of July.

It’s normal for CEOs to leave eventually when their companies are acquired, but the speed of the departure is a bit unusual — usually those CEOs are contracted to stay with the acquirer for a year or two as part of the deal. And Adobe only announced in September that it was acquiring the analytics company for $1.8 billion.

I’ve asked Adobe for the reason behind James’ departure and will update if I hear back. Sometimes a departure can suggest trouble, but in the press release, Adobe CEO Shantanu Narayen said Omniture is doing well for Adobe and is already accounting for 10 percent of the company’s revenue. (Its total revenue in the most recent quarter was $943 million.)

“With Omniture, Josh built the industry’s first integrated online marketing suite as an intelligent platform to optimize online business initiatives,” Narayen said. “Further, he provided the leadership to ensure that we exceeded our timelines and milestones for the integration of Omniture into Adobe.”

Adobe also announced a number of other executive changes. The most significant may be the creation of a new Creative and Interactive Solutions business unit, which will include Adobe Creative Suite, its Flash technology, and publishing and media products. The unit will be led by David Wadhwani, formerly vice president and general manager of Adobe’s Platform Business Unit.

“By combining these products and solutions in one business unit, we can deliver faster on our vision of multi-screen publishing, and drive innovation and support for both Flash and HTML5 authoring,” Narayen said.

The move comes at an critical time for Adobe’s mobile strategy, as Flash’s significance as a mobile platform has been criticized, most notably by Apple.