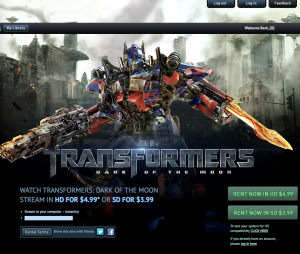 Film studio Paramount Pictures is experimenting with a new digital distribution model for the most recently released Transformers movie.

By offering its own marketplace for customers to purchase the streaming video, Paramount’s parent company Viacom is essentially cutting out “middlemen” services like Netflix, Vudu and others — meaning it takes a bigger cut of the overall revenue.

Viacom is obviously keeping quiet about the experiment. It sent out an e-mail blast Friday (via Viacom-owned MTV’s mailing list) promoting the streaming site for Transformers: Dark of the Moon. Potential consumers have the option of renting a standard version of the film for $3.99, while Windows users can rent an HD version for $4.99. The movie is available to watch for 48-hours after purchasing.

My guess is that this particular film isn’t going to change the way movies are distributed. It seems like a poor approach because it’s unlikely that many people — those who would spend $4.99 on a digital rental — won’t realize the site is up. Therefore, those same people will either rely on existing services like Vudu and iTunes and/or obtain it illegally.

We’ve reached out to Viacom for comment about the company’s strategy and will update the post with any new comments.