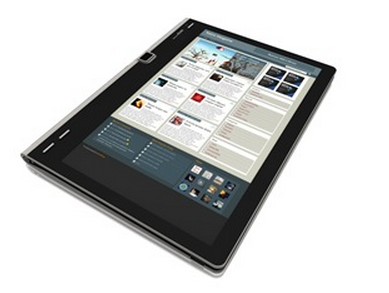 In a blog post today, the company’s chief executive, Mary Lou Jepsen, said her company is “finalizing” the development of its new screen family with its partners, and published a graph showing how Pixel Qi’s latest screens of equal display resolution to the iPad 3 (2048 x 1536) also use much less power than the iPad 3’s battery-guzzling screen (see below).

On the one hand, Jepsen isn’t just another upstart firing off a speculative blog post. Jepsen led the engineering for the One Laptop per Child (OLPC) project, where she architected the design of the so-called “$100 laptop.” So she’s got credibility.

On the other hand, her blog post doesn’t contain any specifics about when exactly this new screen will hit the market.

The firm, based in San Bruno, Calif., late last year raised an unspecified amount of money in a round of funding from 3M New Ventures. Otherwise, the company hasn’t made very many announcements over the past year.

Pixel Qi has manufacturing operations in Taiwan and California.

In her post, Jepsen says about 90 percent of the iPad 3’s battery appears to be used for driving the display, and adds that while she loves the iPad 3 screen quality, she was “shocked” by the overheating reports and the massive 8 Watt power draw. She says her company’s screens will work inside and in direct sunlight, and that her company’s screens boast full image quality matching or exceeding that of the iPad 3 on most measures — including matching or exceeding contrast, color saturation, and viewing angle — all while saving batter power. The Pixel Qi’s low power mode runs at a full “100x power reduction from the peak power consumed by the iPad 3 screen,” she writes.

Existing Pixel Qi screens have been shipped in about a dozen consumer products, and the company says at least 3 million screens have shipped in total. One of the products is the OLPC XO 3.0.