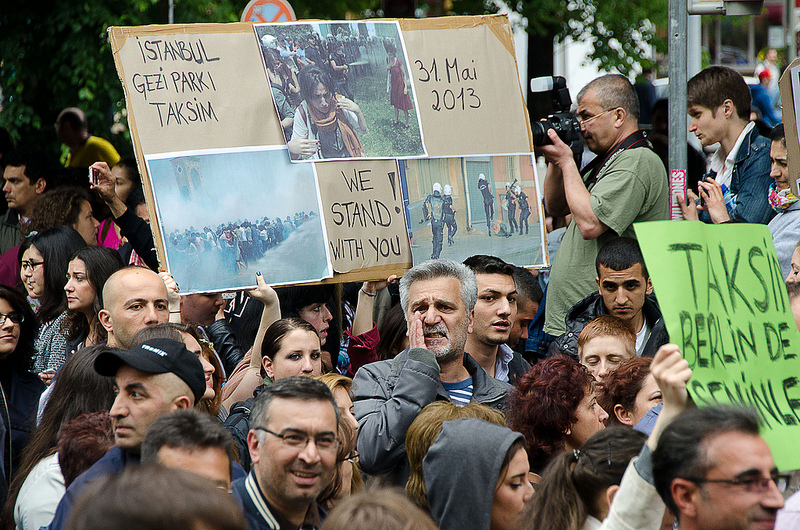 Turkish citizens are crowdfunding their protests against the government.

Turkish protestors have raised $86,000 on Indiegogo to place a full-page in the New York Times raising awareness about the current political situation in Turkey. The campaign went live yesterday with the goal of $53,800 and according to Forbes is one of Indiegogo’s fastest politics campaigns ever. The campaign has 2,210 funders from around the world.

Protests broke out in Turkey over the weekend after the government attempted to bulldoze a park to build a shopping mall and military barracks. The movement quickly gained momentum and turned into a nationwide demonstration of tens of thousands of people against the government. Citizens are “protesting lack of consultation, police’s use of excessive force, defending freedom of speech and right to assembly, and the resignation of Erdogan’s government.”

Murat Aktihanoglu, Oltac Unsal, and Duygy Atacan set up the campaign to attract attention and support they “push for true democracy in our country.” The three live in New York and are active with the entrepreneur/startup scene there. They watched the protests and violent response by the government but felt the events were not receiving adequate coverage in the Turkish press and turned to social media and Indiegogo to gain a following. They also opened up the drafting of the ad’s proposal to the crowd and allowed  supports to edit and vote for their favorite.

The current copy reads “Millions of Turkish citizens have been outraged by the violent reaction of their government to a peaceful protest aimed at saving Istanbu’s Gezi Park […] Over the source of Prime Minister Erdogan’s ten-year term, we have witnesses a steady erosion of our rights and redeems […] We demand an end to police brutality. We demand a free and unbiased media. We demand an open dialogue, not the dictate of an autocrat.”

The campaign owners also asked contributors to suggest how the extra money will be used on community news site Reddit. The ad should run on Thursday or Friday of this week in the front section.