Online publishers have been furiously testing out different content models. To keep up with them, publishing analytics provider Parse.ly today announced a new version of its platform.

The new release is “an entirely new platform, built on entirely new infrastructure,” CEO and cofounder Sachin Kamdar told VentureBeat. It’s the first major revision since the product was launched.

This is an “evolution of the platform to incorporate a unified view of the [current] publishing industry,” he said, with a new emphasis on reader growth, engagement, and loyalty. Customers include Conde Nast, Slate, Dallas Morning News, Talking Points Memo, and the Daily Beast.

For Parse.ly, the drivers to rebuild have been “a mixture of fear and opportunity.”

Publishers recognize that there are only so many ad dollars, he said. New revenue streams for publishers now include a greater emphasis on events, ecommerce, sponsored content, research reports, and paywalls.

His company needed to offer “a platform that’s flexible enough for these new streams [and that] allows a fuller picture of how visitors are interacting with content,” Kamdar said. He noted that the old version was too focused on page views and visitors.

There is also now a more extensive ability to view metrics by desktop, mobile, or tablet, and users can customize the platform to get specs on specific device models. 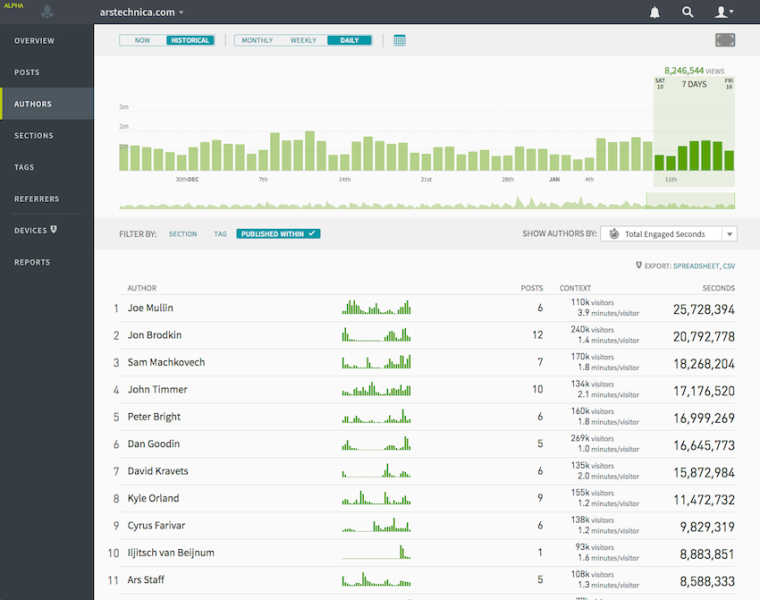 Above: A screen from the newly rebuilt Parse.ly

One thing the new platform doesn’t show, however, is direct revenue generation, such as sales conversions.

Kamdar said this can be inferred from such stats as the most loyal readers, since they are most likely to buy subscriptions or premium content. There is also an API to interface with other systems that can track this.

Event tracking, needed to monitor conversions, is one of the reasons competitive tools like Adobe Analytics and Google Analytics are complicated to use, he said. If it adds such event tracking, Parse.ly would do so in steps.

“Starting out with goal setting [as a next step] would be a great approach for us,” he said, such as being able to set a goal of getting more email subscriptions.

While Google Analytics, Adobe Analytics, Webtrends, and similar products can be used to track visitors, page views, and other metrics, Kamdar said “it takes a lot of work to get the right kind of data into them.” These publisher-specific metrics, which Parse.ly offers out of the box, include stats showing which writers are driving the most user engagement or the ability to immediately see current data in a historical context.

“The main things we offer are ease of use and accessibility of the data,” he said. With Adobe, Google, and the like, he said, “only a few people know how to use them,” while there might be “hundreds” of Parse.ly users in a big publishing organization.