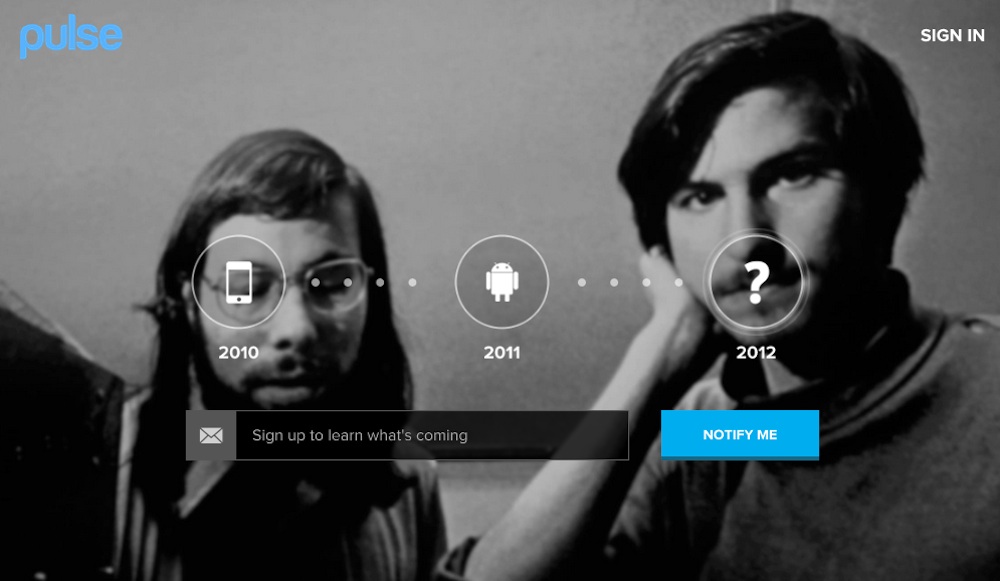 Mobile news aggregation service Pulse is planning a major announcement in the near future, according to the startup’s homepage.

Pulse updated its homepage earlier today to tease the announcement. Initially, users are shown a short animation of Pulse’s launch on iOS in 2010, its entrance into the Android market a year later, and a question mark under 2012. Then, black and white photos of famous technology founders (young Bill Gates, young Steve Wozniak and Steve Jobs working on a computer, etc.) begin scrolling in the background, and users are presented with an option to enter their email addresses to receive information about what Pulse is planning.

I contacted Pulse founder Akshay Kothari for more information, but he declined to share any specifics. “I can’t say much about this — except that something new and exciting is launching very soon,” he told me.

For those who aren’t familiar with it, Pulse is a news-reading service that lets you view up-to-date articles from a variety of publications. It’s available on iOS and Android, and its user interface is optimized to make consuming (and sharing) content from 15 news sites at the same time easily digestible rather than chaotic. It competes with similar digital magazine services, like News360, Flipboard, Zite, Editions by AOL, and Google Currents. Pulse has over 13 million users, who read upwards of 200 million stories each month, as VentureBeat previously reported.

As for what Pulse is getting ready to launch, I have a few guesses. With the homepage mention of its presence on iOS and Android, it would make sense for Pulse to announce a new app for Windows Phone 8/Windows 8. But since Microsoft doesn’t have a very large slice of the mobile device market, this wouldn’t be a big deal for most people — and certainly wouldn’t answer for the photos of legendary Apple founders scrolling in the background.

There’s also the possibility that Pulse is getting ready to launch a web browser-based HTML5 version of its news-reader app, which would make it platform independent. Right now, Pulse only gives you the option of reading articles via desktop web browser when you bookmark them from its mobile apps. And while I use this feature often, I wouldn’t mind having full access to the news-reading app on my computer screen — especially for articles that only contain a clipping of the content and require clicking through to the publication’s website to read more.