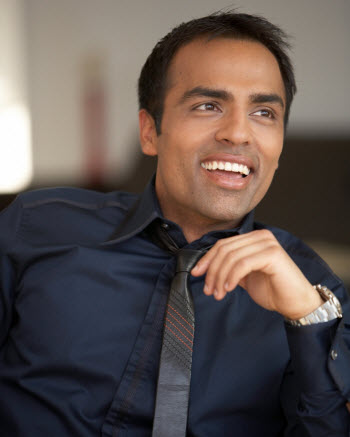 RadiumOne said it has raised $21 million for a new digital ad network that leverages the social web.

That a lot of capital for an ad-based startup, but the San Francisco company believes it can deliver superior advertising performance through its patent-pending ShareGraph technology. The ShareGraph technology analyzes how users communicate with their closest connections and then identifies the specific consumers who are most likely to engage with a brand’s ads. RadiumOne says this works better than traditional behavioral targeting techniques. It also enables consumers to share ads with their friends, creating a multiplier effect for advertisers.

The company is the brainchild of Gurbaksh Chahal, founder and chief executive. He became famous as a whiz kid entrepreneur, founding two ad companies worth $340 million by the age of 25. He founded the ad network ClickAgents at age 16 and sold it in 2000 for $40 million. Then he started behavioral targeting firm BlueLithium in 2004 and sold it to Yahoo in 2007 for $300 million.

RadiumOne is a restart. Originally, the company started 18 months ago as gWallet, which sought to monetize social games through special ads known as offers. The offer business went through a crisis last fall as users felt like some of the offers were scams. The gWallet business is now a subset of RadiumOne’s business and is known as R1 Social.

Chahal sought to come into the offer market as a clean company that worked only with major advertisers and brands. The company is working with more than 200 Fortune 500 brands. But Chahal said he had always wanted to start an ad network but had been prohibited from doing so by a non-compete agreement with his previous company. That non-compete expired on Oct. 15, 2010.

Chahal said he started gWallet to learn more about the social space and it succeeded in bring more than 100 brands into the social space via the offer business. There is synergy between R1 Social and RadiumOne’s ad network business, as both share similar publishers and advertisers. And R1 Social helps ad targeting by providing anonymous user data to RadiumOne.

The company will use the round for international expansion and acquisitions. The company recently opened a United Kingdom office and will launch in continental Europe and Asia-Pacific. The company says it became profitable in the fourth quarter.

Chahal says that the goal of RadiumOne is to use social data to improve online advertising and make a measurable impact for both advertisers and consumers. The company plans to fill a void of socially-targeted advertising outside of Facebook to the open web.

The round was led by Crosslink Capital, with participation from DFJ Esprit and previous investors Adams Street Partners and Trinity ventures. That brings the total raised to $33.5 million. The company has 80 employees and plans to grow to 150 by the end of the year.

Rivals include Media6Degrees, Advertising.com, and SpecificMedia. RadiumOne says it is the only ad network that effectively leverages the social web to serve ads via ShareGraph. One of its innovations is the “R1 Like Button,” which places a button on display ads that lets consumers “like” or share the ad. That helps ads spread in a viral way and gives advertisers feedback on the kind of ads that users want to see.

Unlike friends on Facebook (where users are “connected” to people whom they may not know well), RadiumOne believes that the most significant insights into consumers can be obtained by understanding what people share with a much smaller circle of friends.

ShareGraph relies on real connections where users send or share content with each other in a tighter circle. It leverages all user activities through the whole internet, rather than just a specific social network. ShareGraph measures the strength of a connection between two users based on the type of sharing they do, how often they share, and how recently they communicated.