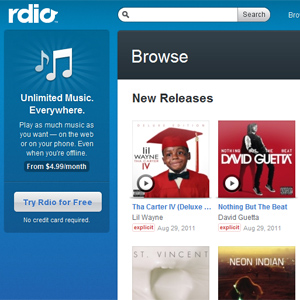 Free on-demand music services in the U.S. all but disappeared before Spotify launched in July, offering a free ad-supported version along with $5 a month and $10 a month premium offerings. Users can currently listen to as much music as they want on Spotify with ads, but in a few months they will only be able to listen to 20 hours a month with ads — a detail that opens the gate for other services.

Specific details on Rdio’s free service are scant at this point, but it will most likely reveal all at Facebook’s f8 conference next week, where Facebook is expected to launch a music service in partnership with Rdio, MOG and Spotify. Here’s what we do know so far: Rdio said it will let people use its free service longer than the standard 7-day free trial and there will be no advertising. Unfortunately, it also said the free version will last an undetermined amount of time before it forces you to upgrade to premium. Apparently, the free version will also last longer the more you use it, but we don’t know more than that.

Based on that description, what Rdio is offering sounds more like a long free trial rather than a free service. It would be extremely frustrating to use what they are calling a free service for 30 days and suddenly have it cut off without warning. Hopefully, the company will reveal a mechanism next week that will prevent this from happening.

In comparison, MOG has a free version of its service starting today. The FreePlay service has a unique way of operating, as it gives you a “virtual gas tank” that tells you how much free music you have left to listen to before you’re out. To get more gas in the tank, users can perform actions like sharing playlists with friends on Facebook, referring friends to the service or listening to promoted artists in MOG’s library. MOG’s free service will be ad free for 60 days while users get acclimated.

San Francisco-based Rdio launched in August 2010 and raised $17.5 million in February with the round led by Mangrove Capital Partners.