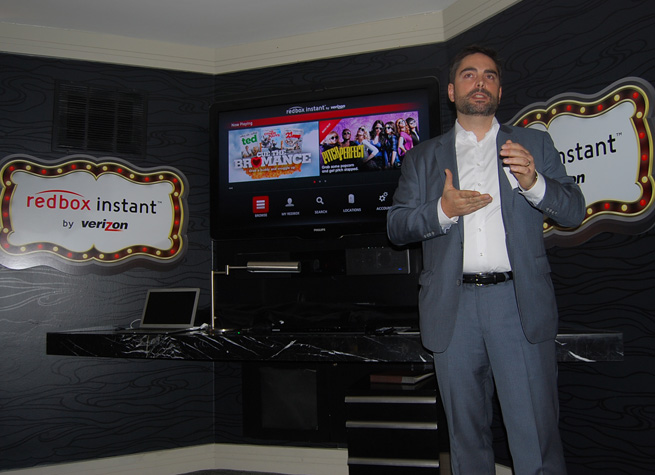 Streaming movie service Redbox Instant by Verizon will fully launch to the public before the end of the first quarter, the venture’s CEO said today at a CES 2013 breakfast.

As we’ve mentioned before, Redbox Instant by Verizon will compete with Netflix, Hulu, Amazon, and other streaming players. But unlike those services, Redbox has the advantage of having 42,600 physical kiosks across the U.S. that offer new releases. Redbox Instant subscribers get four DVD rental credits each month and unlimited streaming for $8 per month.

Redbox Instant by Verizon CEO Shawn Strickland spoke to a small group of journalists this morning in Las Vegas to talk about the service’s goals and how it will work when it launches soon.

“We’re doing the invitation-based beta now … but we will launch sometime later this quarter,” Strickland said. “Movies are the core of the Redbox brand, and movies are underserved in this space.”

Redbox Instant by Verizon has 7,500 “streaming and transactional movie titles” today, but you can stream from a library of 4,500 films at any time using a subscription. It’s adding more titles every day, it said, so we expect that more than 4,500 will be available upon the full launch. And, of course, you’ll also be able to take advantage of Redbox kiosks as well for new DVDs.

Strickland said that the service will focus only on movies now, but he did leave open the possibility of TV content some time down the line.