But does it live up to that potential yet? Not quite.

First, a primer: Google announced its intention to take on TV earlier this year — to mixed response. Google TV is an Android-based platform meant to bring together live TV with internet content — instead of just offering a way to watch internet video on your TV like the Apple TV or Roku Box. At the moment, Google TV is available on Sony Internet TVs and Blu-ray players, as well as Logitech’s Revue set-top box. All of the GTV devices come with remotes that feature a full keyboard and trackpad for navigation.

I’ve spent the past few weeks with the Revue and a temporary Dish Network installation, both provided by Logitech and Google (my typical over-the-air setup wasn’t enough for this review). I set out to test just how much of a game-changer Google TV is, and the results are … complicated.

The Good: It makes your TV watching smarter

Going into this review, I was definitely a believer in what Google was trying to accomplish with GTV — especially compared to a much more limited platform like Apple TV. For all of Google’s ambition, the platform isn’t quite as revolutionary as it could be — but there’s still a lot to like in this first iteration.

Perhaps the biggest benefit of Google TV at the moment is that it makes your overall TV viewing experience smarter. For example, it reduces the need to deal with ugly and inefficient TV channel guides. Cable and satellite providers have forced their customers to deal with the same interfaces for choosing channels for around a decade. Instead of a single screen laying out everything on air, Google TV lets you sort what’s showing by category, and you can also use its built-in search functionality to find specific showings and channels.

Not surprisingly, search is emphasized heavily in Google TV. Being able to search TV listings is already a major upgrade to the way we watch TV, but GTV also expands upon that by searching the web, and the contents of your DVR, all from the same convenient interface. To perform a search you simply need to hit the search button and start typing. Results show up almost instantaneously. But while GTV’s search functionality is innovative, there’s definitely room for improvement, as the results aren’t always accurate. It would also be nice if GTV could also search Netflix’s streaming library, as well as media that you connect via USB or a network share.

Google TV can also fully integrate with Dish Network’s DVR to let you record shows without jumping into the Dish programming guide. Unfortunately, support for other cable and satellite providers isn’t as seamless yet.

In terms of web video, Google TV is currently a mixed bag. It’s liberating to have access to content from sites like YouTube and Vimeo — which both have couch-friendly viewing interfaces with YouTube Leanback and Vimeo’s Couch Mode — on your TV at the touch of a button. You can visit any website with GTV’s Chrome web browser and play Flash or HTML5 encoded video. Unfortunately, many major content owners aren’t yet on board with Google’s vision. Hulu is currently blocking access to Google TV, as are major broadcast networks like Fox, NBC, CBS, and ABC. Just today, Viacom confirmed that it’s blocking GTV as well, including video from Comedy Central and Cartoon Network.

The outlook may look grim for Google TV’s content prospects, but there’s still plenty of web content to watch while the broadcast networks have their hissy fit. For example, you can subscribe to video podcasts from popular internet video destinations like Revision3 and TED.com. You can also view streaming content from Amazon’s video-on-demand store.

Having easy access to a web browser on your TV is also more useful than I originally anticipated. You’re not going to read any lengthy articles on the web with Google TV, but its web browser is useful for looking up information quickly, as well as for things that are simply fun, like browsing the latest LOLCats additions with friends. Browsing is snappy, and for the most part it’s almost like browsing on a dedicated computer. Unfortunately, sites that are heavily loaded with Flash content often bring the Logitech Revue box to a crawl (FunnyorDie.com is particularly brutal). Since all Google TV devices run on the same hardware at the moment — a 1.2 gigahertz Intel Atom CE4100 processor with around 1 gigabyte of RAM — I suspect that they will see the same sort of slowdown as well. I’m hoping that future software updates smooths out Flash performance. 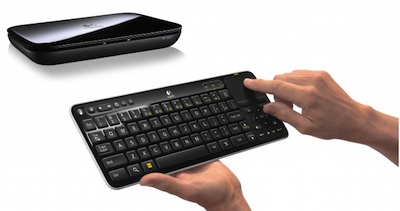 Logitech also includes a media player app that can stream content from your PCs, or any Universal Plug and Play (UPnP) capable device. I was pleasantly surprised at how well Google TV and the Revue box managed esoteric video formats like Matroska (.MKV). I was able to quickly play back 1080p high-definition video with 5.1 surround sound — with none of the stuttering or delays usually associated with streaming HD video.

Google TV also makes living room video conferencing a reality. While Cisco is busy launching its $600 Umi living room webcam (with a $25 monthly service charge), Logitech Revue owners can pick up the company’s TV Cam for $150. The camera uses Logitech’s Vid HD network, and it lets you call other Logitech Revue owners, as well as Vid HD users on computers. In my testing, video quality looked sharp and streamed smoothly. Performing video chats in your living room does take some getting used to, but there are definitely instances where it’s better than using a computer — for example, if you want more than a handful of people on screen at one time. Logitech’s webcam will also get much more useful down the line once other services, like Skype, make their way to Google TV.

What’s most exciting about Google TV for me is the potential it has to get better. There are only a handful of apps at the moment, including Pandora and Netflix, but an app marketplace will arrive early next year. More content providers are beginning to optimize their websites for Google TV (and other HTML5-ready platforms like Boxee). Just yesterday the popular web video show network Revision 3 launched its GTV-friendly site. Integration between Android and Google TV will also improve, as will further integration with other mobile and desktop platforms.

Look at the vast improvement between Android when it was first released, and Android one year later with the release of the Motorola Droid, to get a sense of just how much things can improve. Compared to the initial Android software and devices, Google TV is far more successful initially. But of course, there’s room for improvement.

Given how much Google TV is trying to accomplish, it’s not all that surprising that the initial setup for Logitech’s Revue box is somewhat complex. Hooking up the cables on the rear of the box is simple enough, but there’s a multi-step on-screen setup process that general users may find intimidating. It involves plugging in your cable or satellite receiver information, as well as digging up your TV and audio receiver model numbers. There’s also an obnoxious process for adjusting Google TV’s interface to fit your TV screen. If you want full integration with a Dish Network DVR, there are even more cables to plug in, as well as extra setup steps (plus an extra $4 monthly charge by Dish).

Once you’re fully set up, you have to come to terms with using a keyboard in your living room. The Logitech Revue comes with a keyboard that’s slightly smaller than a full-sized desktop keyboard, which makes it both awkward to use on the couch, and tough to store afterwards. Logitech sells a more sensibly sized Mini Controller, but that’s an extra $130.

Logitech would have been better off just including the Mini Controller with the Revue — hopefully that will be a possibility by next year. Sony developed its own controller for its Google TV devices, and while it’s smaller than a full-sized keyboard, it still looks like a usability nightmare.

While Google TV manages to deliver some compelling features with this initial release, it still feels very much like a version 1.0 product. Navigating through menus, loading apps, and juggling a live TV feed with web content can be slow and problematic at times. I voice these complaints only to point out they exist, but I suspect much of the sluggishness and bugs will be worked out in future software releases. If the trajectory of Android is any indication, Google TV software may be unrecognizable by this time next year (then again Android needed much more improvement from its first version).

The apps built in to Google TV need some improvement as well. The Netflix app, in particular, seems generations behind other Netflix streaming interfaces available to consumers. You can only browse your Netflix queue on GTV — there’s no searching available, and you can’t add new titles to your queue from the interface. Both Google and Netflix say that the interface will be upgraded soon, but it’s still a total disappointment to see software that looks like it should be on the first-generation Roku box from 2008 so close to 2011.

The Netflix issue speaks to the bigger problem with Google TV: It isn’t a very good value at the moment, given that you can get (better) access to Netflix and other web video with cheaper options. To get access to GTV, you need to spend $300 on the Logitech Revue box, $400 for the Sony Google TV Blu-ray player, or buy a Sony Internet TV with GTV. Instead, you could just spend $60 on a Roku box, or purchase a video game console that has support for Netflix. For the average user, Roku offers a simpler interface and setup, plus it has access to loads of web content (it just recently added Hulu Plus support).

Google TV also doesn’t fully support many cable and satellite operators at the moment. Thus far, only Dish Network features deep Google TV integration with its DVRs. GTV is also a better deal for Dish subscribers — they can purchase the Revue for $179 after an instant discount.

If you don’t mind paying a premium for a platform that’s still dealing with growing pains, then give Google TV a shot — especially if you’re a Dish Network subscriber. For everyone else, cheaper options like Roku will suffice.

Having said that, I still believe Google TV will mature well over the next few years. Google will eventually figure out ways to appease the TV networks and get its software integrated onto more TVs. Eventually, Google TV could replace the aging software on cable and satellite boxes altogether.

Why am I holding out hope? I think it’s because I see the value in Google TV’s potential. Google is trying for something completely new and different. Whereas other contenders in the web video set-top box arena, like the recently launched Boxee Box, are finding themselves restricted by their secondary TV input status — that is, you have to navigate away from your live TV to enjoy them. As Google said when it first unveiled GTV, it’s aiming for your primary TV input. Eventually, GTV will be cheap and ubiquitous enough to finally live up to Google’s lofty ambition.