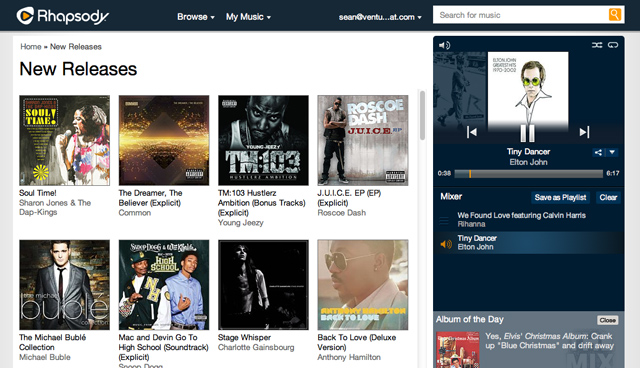 Rhapsody has been around for 10 years, but it is now fighting fiercely with newer competitors like Spotify, MOG and Rdio. Spotify in particular has been agressive and recently announced it now has 2.5 million subscribers. However, don’t let that number fool you, as Spotify is actually in 13 countries, while Rhapsody is only available in the U.S.

In its 10 years, Rhapsody has evolved quite a bit, with better designs and a constantly growing catalogue that now has 13 million tracks. But 2011 is the company’s biggest year, with the 1 million subscriber mark, a small indie rock music festival in Austin, a Windows Phone 7 app launch, integration with Facebook Music and most importantly, the acquisition of small-time rival Napster from Best Buy.

“We’ve accomplished quite a bit over the past decade, so it’s no small statement to say that 2011 was probably our biggest year yet,” said Rhapsody president Jon Irwin, in a statement. “I told our team that when we topped one million paid subscribers, I’d shave my head… it was probably the best free haircut I’ve ever had.”

Rhapsody is now streaming more than 10 million songs a day and is available across more than 60 devices, including PCs, Macs, smartphones, iPod touches, smart TVs and old-school MP3 players. Next on the company’s docket is finding more devices and expanding where you can listen to streaming music.

“The next frontiers for subscription music are the living room and the car,” said Irwin. “Consumers will be able to enjoy Rhapsody from even more connected audio and video systems, as well as other platforms and distribution channels-at home, in the car and everywhere in-between, domestically and abroad.”