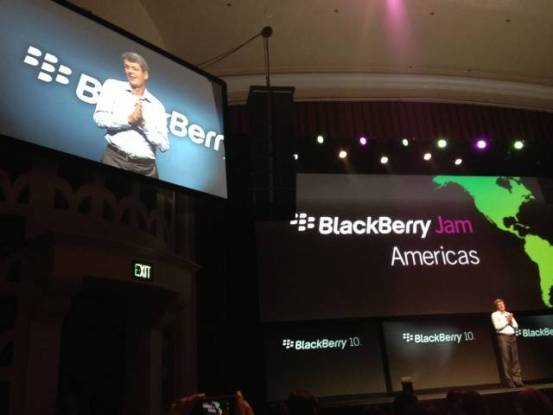 If you’re RIM right now, you probably have your eye on two things: One is your bottom line, which is shrinking by the day, and two is your developer base, which, too, is violently contracting.

But despite its dwindling resources, RIM is still eager to at least tell the world what it’s working on. That’s the idea behind its event today at the BlackBerry Jam Americas conference, RIM’s latest attempt to convince developers and consumers to be patent and stick with BlackBerry.

One big feature RIM announced today was the addition of movies, music, and TV shows to its BlackBerry App World catalog. While it’s not yet certain whether the move will result in a Google Play-esque rebranding, the additional content puts RIM at least on a level playing field with its competitors.

But RIM’s new BlackBerry 10 pitch is larger than just a me-too content push. The company also announced that BlackBerry 10 would get native versions of Facebook, Twitter, Foursquare, and LinkedIn. (Please, hold your applause.)

And developers — RIM hasn’t forgotten them either. RIM plans to open up BlackBerry 10 app submissions on October 10. Likewise, in an effort to get developers interested in BlackBerry 10, RIM will continue to plainly bribe them.

Any developer that makes $1,000 from a BlackBerry 10 app submitted by January 23 is eligible for a payout from RIM of up to $9,000. Apparently, the company is trying to tell developers that they have nothing to lose by developing for BlackBerry 10 (assuming they make at least $1,000).

Despite RIM’s announcements, the company’s largest hurdle remains convincing both consumers and developers that BlackBerry 10 will be worth switching to from Android, iOS, or, hell, even Windows Phone. So far, RIM hasn’t done that.

Moreover the big, key, vitally important question is this: When will any of this launch? As it had previously, RIM says that BlackBerry 10 is “a few short months away,” which is both vague and probably bad news.